MASSACHUSETTS -- A Shrewsbury couple is struggling to come to terms with their two small dogs being mauled to death by a Siberian husky while the animals were in a local kennel.

On the weekend of June 12, Roger Demers and Brenda Davis-Demers went on a cruise for their 25th wedding anniversary. Before their departure, the couple dropped off their dogs, Graham, a 6-year-old mini-poodle, and Odin, a 4-year-old longhaired Chihuahua, at Gibson’s Natural Pet Resort, owned by Bob Gibson.

They went to pick them up on June 14. But something was wrong.

“During our morning routine cleaning, one of our staff members heard a commotion and went outside and realized that this dog (an 8-year-old Siberian husky) had broken out of its kennel, causing the kennel’s casing to be loosened up, thus allowing her to get to these two dogs (Graham and Odin),” Mr. Gibson said. “The girl (worker), when she came out, it was too late. They already passed.” 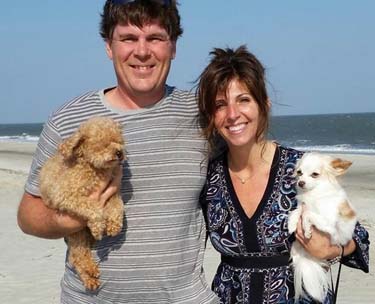 After the grisly discovery, the kennel’s manager called Mr. Gibson, who was vacationing in New York with his wife and two of his three sons. Mr. Gibson immediately returned to Grafton and frantically tried to reach the couple by repeated email but was unsuccessful. By the time he finally got them on the phone, the couple was already on their way to pick up their dogs.

“It’s probably the worst thing I had to say to somebody in my entire life,” Mr. Gibson said. “It’s not something I would ever, ever want to do again.”

Mr. Gibson theorizes that the Siberian husky, named Ticqua, was able to loosen and then break the brackets on a portion of its own run, gaining access to the adjacent, outdoor portion of the run.

“All the dogs here are in their own separate kennels. They are locked in their own individual runs when they’re here,” Mr. Gibson said. “We never had to have somebody on the outdoor area of the kennels in the morning because they are locked in these chain-linked fences. We never had a dog escape. We have so many precautions in place to prevent that.”

Ms. Davis-Demers said she and her husband have a series of unanswered questions for the kennel owner.

“I don’t know how it (the Siberian husky) can loosen a bar two cages over? Then, I’m thinking, how are they in the same area, a big dog and two little teeny dogs? They don’t even weigh seven pounds,” Ms. Davis-Demers said. “We said to him, 'How is it possible that this dog is going crazy, can make all this racket, get out of its kennel and go after my two dogs, nobody sees anything, nobody hears it and it has the chance to do this to my two dogs?' ”

Ms. Davis-Demers said she feels that Gibson’s Natural Pet Resort should be fined and the Siberian husky who ripped her dogs apart should be euthanized, instead of being allowed to go home to its owner in Northbridge.

“If that dog was that aggressive and angry and to get out and get at them, then there’s something wrong with that dog,” Ms. Davis-Demers “It’s not a safe dog. I wouldn’t want it in my neighborhood.”

“Animals can do some amazing things, sometimes, but you have to look out for that. We have been in the business long enough to know what a bad dog is,” Mr. Gibson said. “We don’t take aggressive animals here … I don’t know why this dog all of a sudden turned and did what she did. I don’t understand it.”

Daniel A. Chauvin, animal control officer in Northbridge, Sutton and Millbury, said he never had any calls or issues about the dog that killed Graham and Odin.

Northbridge Animal Inspector Rochelle C. Thomson said Ticqua was placed on a 45-day in-home quarantine, which is standard protocol under state Department of Agricultural Resources procedures. The Siberian Husky is properly licensed and up-to-date on all its shots.

The Siberian husky’s owner did not return calls.

While Mr. Gibson acknowledges that there is rust on some of the kennels, he insists that all the runs in the facility have been thoroughly checked for structural integrity since the incident and, as an added precaution, reinforcements have been installed to ensure an incident of this nature does not occur again. Gibson’s Natural Pet Resort has been in business for 13 years. Prior to this incident, Mr. Gibson said, the kennel never had an incident like this before.

“This poor woman, you have no idea what she must be going through. I mean, she’s lost her two babies, which is incomprehensible. I couldn’t imagine coming home and not being able to see my dogs. They were gone and I never got to say goodbye. That’s how she feels,” Mr. Gibson said, fighting back tears. “We try to give these animals a safe place to be while their owners are away and then something like this happens. It’s just beyond devastating.”

“We come home to an empty house,” Ms. Davis-Demers said while sobbing. “Our children are grown and there’s no little feet pitter-pattering around. No toys. My husband had to pack everything up. It’s horrible. We’ll never see them again.”