CALIFORNIA -- Cliff Notes version: Woman attacked by homeless guy's pit bull. Obviously, a homeless crackhead is not going to have any money for her medical bills. She is convinced to take an ambulance to the hospital and now her insurance won't pay for it.

Really, the city of San Francisco should pay the entire bill since they're a sanctuary city for illegal aliens and homeless people sleeping, urinating, defecating and shooting up everywhere. 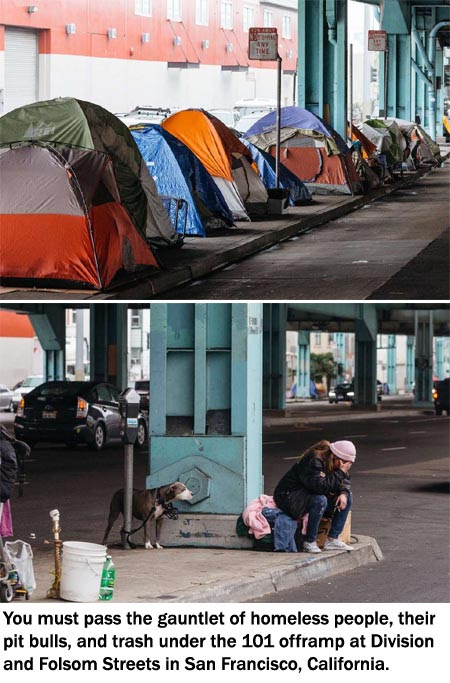 Anyway, she says a passerby who witnessed the pit bull attack her "insisted" she call the police. She should have had 911 on the phone already.

How many people and pets have been mauled by this dog? Is it vaccinated? Animal Control needs to do a report so they can track this dog. Maybe it's done this before and now they can seize the dog from him.

The Story
I think most of us really hate asking for help, but sometimes you just have to swallow your pride and give people who care the chance to help you when you need it most.

This is one of those times.

On April 20, 2016 I was attacked by a homeless man's pit bull as I walked past an encampment on Folsom Street in San Francisco.

It was sudden, unexpected, without warning, and as you can imagine absolutely terrifying. I still have flashbacks. The dog first lunged for my chest. I knocked him off with my left arm which he then bit into. Fortunately I was wearing layers and when I managed to break away I was in shock, but not as badly injured as I could have been.

A passerby insisted I call the police. The police insisted on calling an ambulance even though I made it very clear that I could not afford one. The officer promised that I would not have to pay for it because I was the victim of a crime and gave me Marsy's Card to contact Victim Compensation. He also insisted that I really had no choice but to go in the ambulance. The EMTs also assured me that I would not be responsible for the bill.

My claim was denied because as currently written, the program does not cover dog attacks unless the owner of the dog orders the attack.

My claim is currently in the appeal process and will likely not be finalized until April. 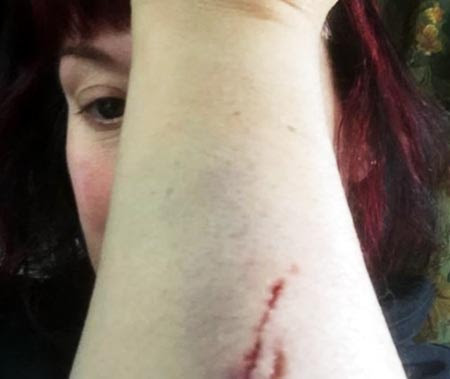 In order to protect my credit I already paid over $600.00 in medical bills for the emergency room visit because Kaiser Permanente had sent me to collections, however I can't afford the $2009 ambulance bill and I'm very concerned SFFD will send me to collections as well.

I am hoping to raise $3000 to cover the medical bills, ambulance bill, and lost wages. Any money in excess of that amount will be donated to charity, most likely the ACLU or the Southern Poverty Law Center. If my appeal is granted and I am reimbursed, all the money will be donated.

What if someone wants to help you but doesn't like either of those two organizations? At least she's being honest as to where she would send the overage.

I know a lot of us struggle financially to make ends meet, me included. If you just can't offer anything other than best wishes I completely understand, but if you feel called to donate even $1.00, I would be forever grateful. Every penny will help.

Much love and gratitude to you all,
Beth

It's not even been a week yet and I'm already almost 2/3 of the way to my goal. I'm amazed at the generosity and support I'm receiving. Thank you so much! I will continue to share this campaign and updates as we move forward. Again, THANK YOU!!

ps. The latest pic shows what my arm looked like about a week after the attack. It is fully healed now!  :) 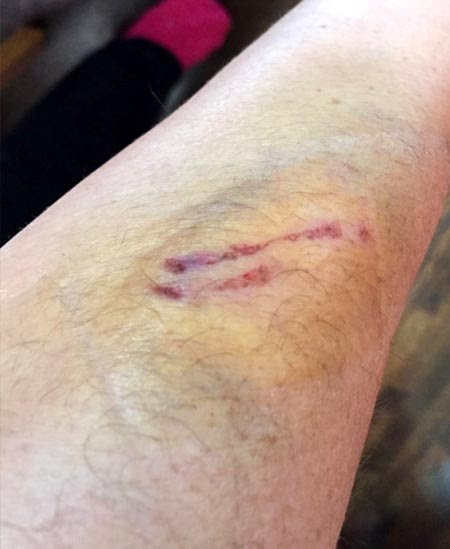 Posted on January 24, 2017
Many thanks to those who have donated. I'm continuously amazed by your generosity! I'm closer to my goal than I thought I'd ever get, and I want to keep going. If you are so inclined, please share this. Every penny helps. I need just a little more to pay off the ambulance and if I can do that, I'll be thrilled!

Thanks again to you all!
Beth 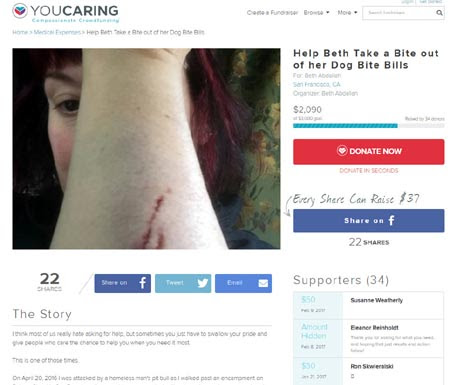