CANADA -- Anca Meiloaica still has trouble finding the words to describe the terrifying Monday when, she says, an off-leash dog attacked her inside Brock Ridge Community Park in Pickering.

She and her son Bogdan took their ten-year-old Shih Tzu out for a walk in the evening. That’s when, she clams, all of a sudden she noticed a pit-bull-like dog started speeding towards them.

“It just started speeding up and was trying to get my small dog,” she told CityNews. “I was scared he might kill my dog, so I put myself between my dog and the other dog, thinking he would avoid me somehow.”

Instead, she says the canine smashed right in to her, knocking her to the ground and sending her to hospital via an ambulance. She says she suffered severe injuries to her legs, and was told by doctors she would need surgery to repair her tibia, which was fractured in 20 places. 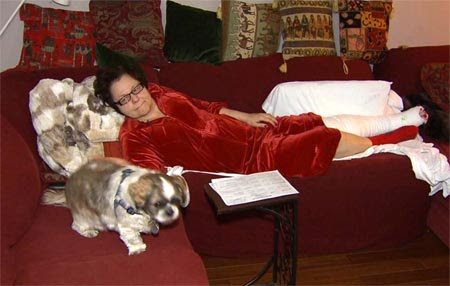 To make matters worse, Meiloaica claims the woman who owned the dog, who was at the park along with a child, left the scene shortly after the incident.

“It made me upset because obviously she didn’t care about how I was or what will happen to me, although it was her fault, not taking care of her own dog,” Meiloaica said.

She told CityNews doctors can’t operate on her leg until the swelling comes down, and when she gets that surgery, it will take at least three months to recover.

Injury attorney Andrew Iacobelli, a personal injury lawyer with Iacobelli Law Firm, says dog attacks occur far more often than some may think. In regards to Meiloaica, he says it was a clear case of negligence.

“If dog was required to be on a leash and it’s a park where dogs are supposed to be on a leash, then certainly you can claim negligence against the people responsible for the dog for not handling the dog,” he said.

The family says the incident was reported to both the City of Pickering and Durham Police, but they fear the attack is going unnoticed. Bogdan also claims police told them there was nothing they could do.

Pickering does have pet bylaws in place that allow for residents to report any aggressive behaviours from animals.

Toronto just recently made changes to its Dangerous Dog Bylaw, which hold owners more accountable for their canines if they’ve been involved in any aggressive behaviour.

Under Pickering’s Responsible Pet Ownership bylaw, it states the department will investigate any reports of dog bites.

“This is a criminal case. I have to suffer for someone else’s negligence,” said Meiloaica.