FLORIDA -- A Lakeland man was arrested Monday on charges in connection with running a cockfighting operation at his home.

As deputies arrived at Montero's home, they said they found Montero breaking down a fighting ring and attempting to conceal it in the garage. 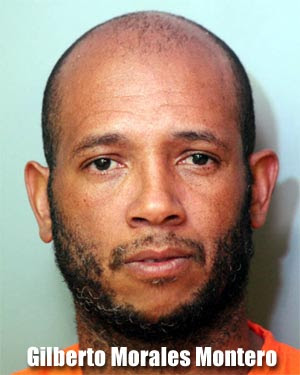 A search of the property revealed that Montero was allegedly housing roosters which had alterations to their bodies. PCSO said in its report that the roosters had their talons trimmed and feathers removed, which they said is indicative of cockfighting.

Deputies also found in Montero's refrigerator vitamins and supplements given to roosters for the intent of fighting. They found bottles of Gallomin, Supertrom, Forty Gallo and Rapidita. According to the report, the medication is intended to boost a rooster's health and stamina as well as calming the birds.

The roosters were removed from the home and turned over to PCSO Animal Control.

Montero was taken to Polk County Jail and is facing charges of possession of animal fighting and baiting paraphernalia and tampering with physical evidence. He is being held on $2,000 bond.

According to the affidavit, deputies responded to home at 7908 Walt Williams Road in Lakeland in reference to a noise complaint involving roosters. Deputies observed roosters in pens and a round ring covered with carpet. Montero was in the process of dismantling the fighting ring and attempting to hide it inside the garage when deputies arrived.

Deputies searched the home and located inside the refrigerator bottles of Gallomin (vitamins for rooster), Supertrom (B-12 vitamins for boosting the birds overall health and stamina), Forty Gallo (an iron supplement for boosting the roosters stamina), and a bottle of prescribed medication from a veterinarian in the Dominican Republic for Rapidita (a vitamin given to roosters before they fight to keep the bird from stressing).

The roosters on scene were manicured in a way indicative for fighting roosters with their spurs trimmed, combs cut, and feathers removed. The roosters were also singled out in their own pens. These roosters were surrendered to the PCSO Animal Control section.

Montero was transported and booked into the Polk County Jail and bond is set at $2,000.