Pennsylvania: Police say Kenneth Joint, 27, ordered his pit bull to maul cat to death while he videotaped it

PENNSYLVANIA -- The Erie man, wanted since January for a vicious animal attack is now behind bars.

Kenneth Joint, 27, is in prison on a hefty $500,000 bond, after his arraignment on charges of animal fighting, and cruelty to animals by District Judge Tom Carney. 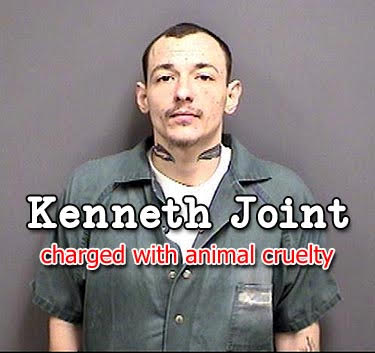 Joint is facing three felony counts of animal fighting, and two counts of cruelty to animals.

Animal cruelty investigators with the Humane Society of Northwest Pennsylvania, filed the charges against Joint, 27, on January 18th.

They say he encouraged his 2-year old Pit Bull, Kovu, to brutally attack a cat, killing it, all while capturing it on cell phone video, then sharing that video with friends.


According to information in the criminal complaint filed against Joint, a man contacted the Humane Society on Jan. 10 and passed along a video, which was sent to the man through Facebook Messenger, that showed Joint calling his dog into the basement of the residence and "allowing and encouraging" the dog to attack an orange and white cat for about one minute.

Joint is heard in the video saying, "Get that (expletive)" and "You hear bone breaking," according to the affidavit.

Investigators tell Erie News Now it was one of the most horrific videos they've ever seen.

Investigators discovered the dead cat outside of Joint's east 25th street home, and the dog is still being held as evidence at the Humane Society in Millcreek.