Oklahoma: Purcell police officer Kyle Glasgow, reeking of alcohol and slurring his words, falls off his motorcycle, shoots his neighbor's dog then drives home, gets his patrol car and returns to speak with officers who don't make him do a field sobriety test

OKLAHOMA -- Kyle Glasgow, a Purcell police officer has been charged after he allegedly shot a dog with his service weapon, leaving a family pet bloodied and injured.

“It caught this leg, and hopefully if I can keep the infection out of his joint, he won’t lose his paw,” the dog’s owner told KFOR in Oct. 2016. 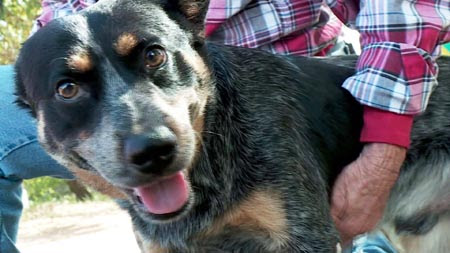 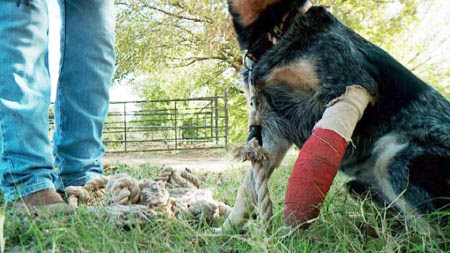 Champion sustained a gunshot wound on his foot, where he was allegedly shot by Purcell Police Officer Richard Kyle Glasgow.

“They said that he fell over on his motorcycle and that he had shot my dog, Champion,” the dog’s owner said.

Glasgow lives nearby and has been known to complain about the dog running out into the road, but witnesses say that wasn’t this case this time.

“He fell over and then he took his gun and then shot twice,” Champion’s owner said.

Officers arrived and while speaking to the dog owners, Glasgow pulls up in his police-issued unmarked black Dodge Charger.

Clearly this was an effort to gain favor with the deputies on-scene. 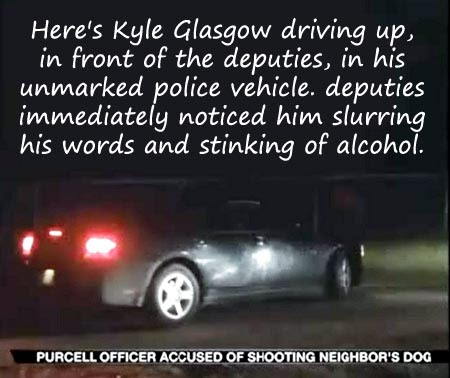 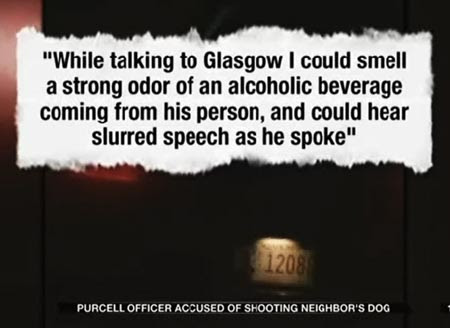 A sheriff’s report states Officer Glasgow had slurred speech and deputies could smell a strong odor of alcohol.

It also stated the officer used his police issued gun to fire one shot into the ground and another shot at Champion.

“They heard two shots and then the dog yelped,” the owner said.

According to the report, the officer was not arrested. Nor does it appear that he was given a field sobriety test on-scene after the deputies had probable cause to believe that he was impaired from alcohol and had been observed driving.

When he arrived, one of the deputies told Purcell Police Department Assistant Police Chief Bobby Elmore that HE BELIEVED GLASGOW WAS INTOXICATED, according to the report. 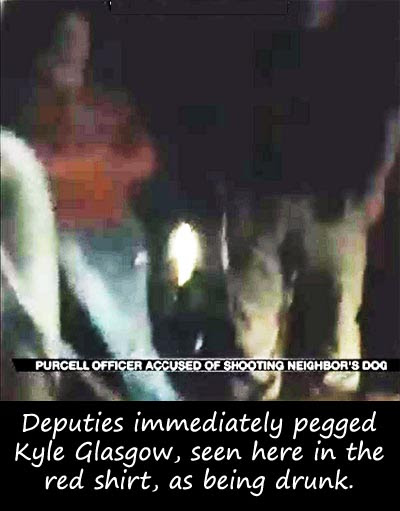 Again, no one made Glasgow do a field sobriety test. Instead, someone from the Purcell Police Department was called to come and get his unmarked police car AND INTOXICATED OFFICER KYLE GLASGOW was driven home.


Later, after all the incriminating evidence related to the DWI (and shooting his police-issued gun while intoxicated) was eliminated from the equation, the Oklahoma State Bureau of Investigation was called to investigate the shooting of the dog. 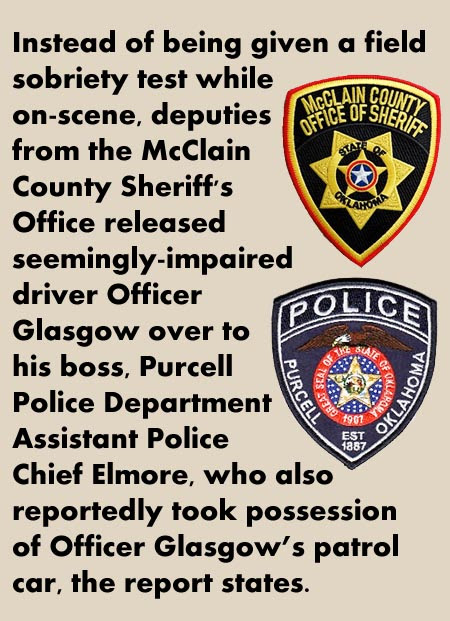 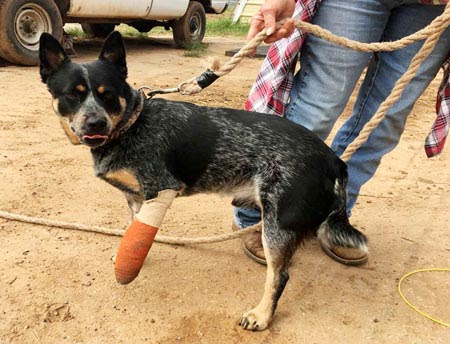 If you were Glasgow's neighbors and you observed all this special treatment for Glasgow, would you have any faith in your local sheriff's office? If you were standing out there after your dog had been shot by Kyle Glasgow and he shows up in front of the deputies in his unmarked police vehicle and is staggering around, slurring his words and reeking of alcohol, wouldn't you have expected for him to be arrested and taken to jail? Wouldn't you be absolutely livid to see them treat him like a VIP's son and take him home to sober up, instead of taking him to jail?

Would you feel that your neighbor Kyle Glasgow has just been emboldened into thinking he can do whatever he wants and get away with it? Would you be worried about retaliation and harassment from him and other members of the Purcell Police Department?

If I were them, I would certainly be worried. 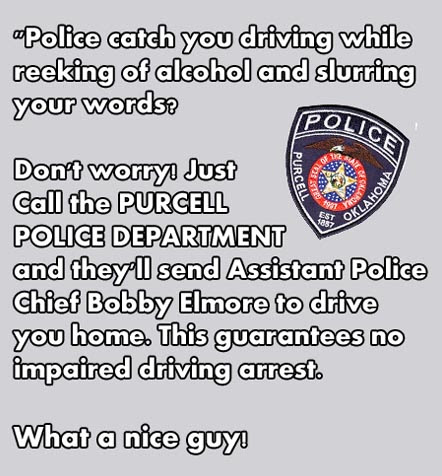 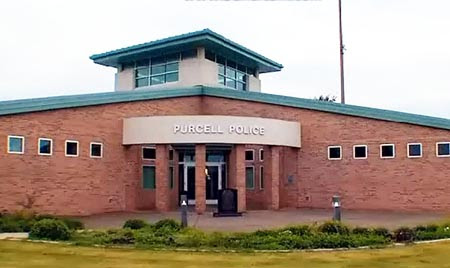 TR Cardiac Tony Swinney - As far as Glasgow’s current employment status, a Purcell PD spokesperson said that is a personnel matter that he is not at liberty to discuss.

NOTICE THE WORD "PERSONNEL", NOT "PERSONAL". That means it concerns an employee matter, not a privacy of the cop matter. The department can't comment because it could impair the investigation.

John Cooksey - If he laid his bike over , how did escape physical injury? Was there damage to the bike? If allegations were made that the dog caused an accident, officers should have investigated further, and on his bike or in a police unit, if he was impaired , or the officer on scene smelled alcohol, tests should have been given , if he was dui, he should have been arrested. They dropped the ball on this , hope OSBI can help rectify this unjust action. 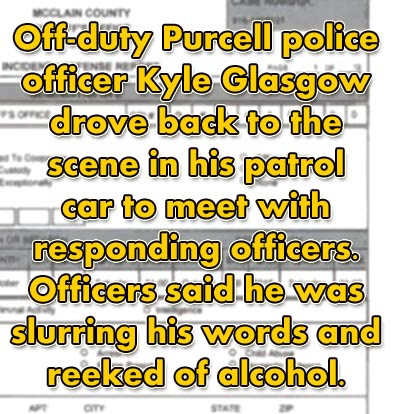 Donna Trustnoone Clevenger - If it had been a regular civilian And they smelled of Alcohol while driving they would have been taken to jail for DUI And he was driving a unmarked cop car ??? Guess it's ok for the ones who are supposed to serve and protect us !!! SMH

Bryan Stapp -Police aren't out there to protect and serve you. They are out there to uphold the law. You should read the article again. He was driving a motorcycle and laid it over when the dog ran out in front of him. He then showed up in the unmarked car.

Donna Trustnoone Clevenger - Bryan Stapp First of all Yes They Are and it even says it on the POLICE CAR. And Regardless he was still driving a POLICE CAR while smelling of Alcohol. And should have been taken to jail.

William Shelton - Bryan Stapp, so you're justifying what this cretin did? Why does that not surprise me?

Gregory Standforth - The OSBI won't find that the officer did anything wrong. Cops _always_ cover for cops. The cop could have shot the dog and the homeowner and the OSBI would find "reasonable cause" for the shooting. In this case the bully wears a badge and a gun and he'll be allowed to continue as long as he chooses. When those who are charged with keeping the peace become the aggressors we truly have a police state.

Ken Stet - Personal matter, what a bunch of crap. The police are so bold they continue to thumb their nose at the public. Make some time between the incident and when they will come back with the officer did no wrong doing. Enough is enough. The people need to start investigating especially if the officer in charge starts saying crap like i wont comment its a personal matter.

Donna Barnes Newsom - I come from very pro law enforcement family and background. I don't condone nor appreciate stupid and/or bad cops. Our law officers have a tough enough time without idiots like this! 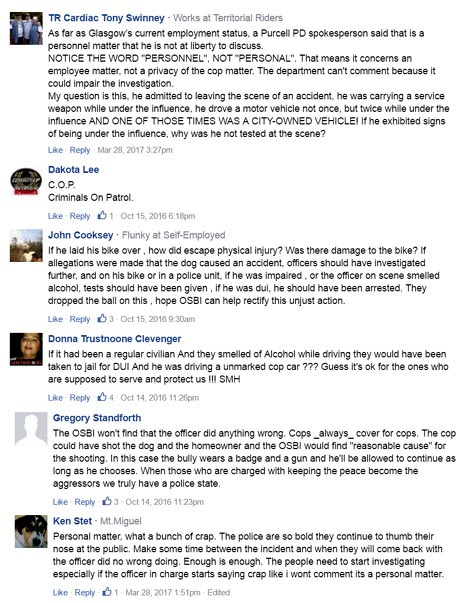