Arizona: Adam Frankel, 33, beat a police K9 with a rock breaking three of its teeth. Now he's been charged with Animal Cruelty

ARIZONA -- Mohave County Sheriff’s Office says a man faces numerous charges after running from MCSO deputies and hitting an Arizona Department of Public Safety K-9 with a rock and breaking three of its teeth Thursday morning. 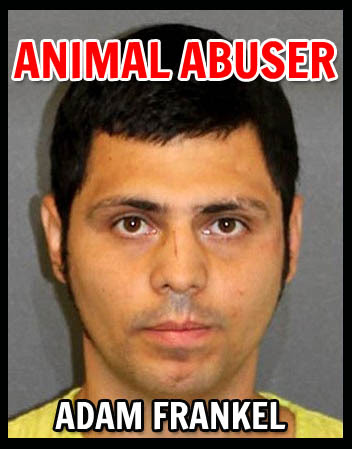 According to sheriff’s spokeswoman Trish Carter, at about 6:30 a.m. deputies responded to a domestic violence report at a home in the 11600 block of East Blake Ranch Road, northeast of the Petro Truck Stop on Interstate 40.

Dispatchers told deputies a woman said her nephew assaulted her. As deputies arrived at the scene, they saw a gray vehicle drive off. They also spotted two women in the vehicle when it stopped near their patrol vehicle.

As deputies exited their vehicle, a man later identified as Frankel, got out of the backseat of the gray vehicle and ran toward the home. Deputies caught Frankel and walked him back to the vehicles.

Frankel reportedly denied the incidents. Deputies began to take Frankel into custody when he reportedly got away from the deputy’s grip and ran into the desert. The deputy lost sight of Frankel and couldn’t locate him.

The DPS Ranger helicopter and DPS K-9 officer responded to assist deputies. The officer and K-9 started tracking Frankel while announcements warned Frankel to come out.

Frankel was found hiding in a bush and he allegedly hit the K-9 in the face with a rock, breaking three of the dog’s teeth.

Frankel continued to be combative and ran toward a house. Deputies captured him after he tried to run past the house and hide behind a tree. He was transported to Kingman Regional Medical Center for medical clearance, possibly due to the heat Carter said, by the Ranger helicopter. Frankel was transported and booked into the Mohave County jail after being cleared from KRMC.

The K-9 was taken to a veterinarian for surgery. There is no word on the extent of the dog’s injuries, but Carter said there’s an estimated $8,000 in vet bills.