My 8-year-old was just inside of our home after playing outside with the neighbor's kids. He said he left something outside and ran out the door to retrieve it. A few seconds later I heard screaming and ran out to the door. My son was crying as he was walking back to the door and he said the neighbor pit bull had bit him. The neighbor at the time did not know anything had happened because she was trying to put the door indoors. I said to her "your dog bit my child" of course the little girl with her told her what I said and she came over. The dog clearly did not bite a hold on him but his grip was deep enough. I called the cops and the paramedics came out and said since my son was up to date on his shots and the dog since being a house dog. The owner apologized and said the dog is also up to date on his shots.

My question is should I still take my son to the emergency room just in case? My son is doing fine and is playing his tablet. I just want to be sure.

Michelle - posted 5 days ago
You haven't said where he was bitten or if it even broke the skin.
I'm not a dog person and have been bitten by a dog that required plastic surgery so I am very wary of dogs but I don't think a trip to the ER is needed. Maybe book in to see your GP if you are worried.

Ev - posted 6 days ago
Miracle, why not take him. It might be just as well as being sure the owner is saying the dog had all its shots. It does not take much for rabies to cause issues. I am with Sarah on this and also I agree that the attack should be documented with the county and even the city police.

Sarah - posted 6 days ago
As long as the owner has concrete evidence of the dog having its shots. I'd also make sure it gets documented as a dangerous animal attack with the county. If the owner can prove the dog has had its rabies shot? Then fine, but if not- do not take their word for it as rabies is nearly always fatal in humans

Miracle - posted 6 days ago
no dont take him 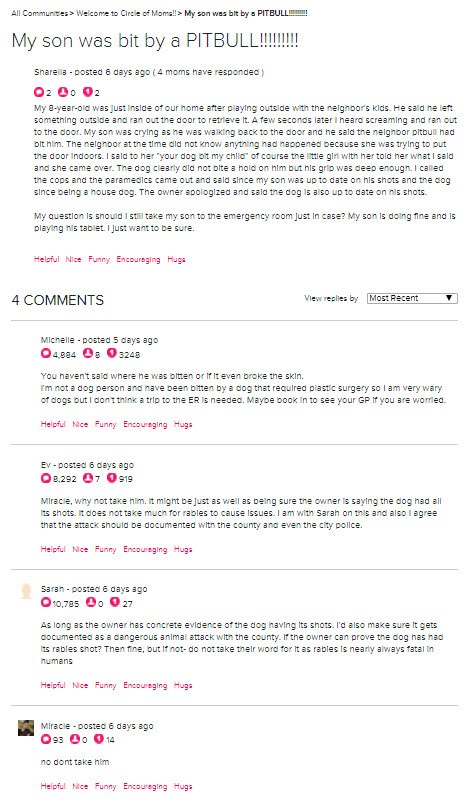