OKLAHOMA -- Hello, my name is Kristin Pistilli. I started this page to help my family members, Ronnie and Brittney Andrews offset some of the huge vet bills to save sweet Macy!

On December 21, 2017 Ronnie was out walking, Remington (1 year old daughter) Macy (chocolate lab). While on their walk, a pit bull came charging at them. 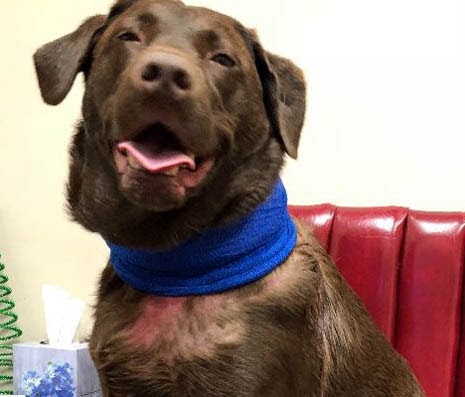 The aggressive pit bull viciously attacked Macy, grabbing her by the neck with it's teeth and not letting go. Ronnie fought to get the pit bull off Macy, the pit bull had a lock on her. The pit bull bit Ronnie's hand twice.

A witness stopped his car on the street to help Ronnie get the pit bull off Macy. They were finally able to get the dog off Macy, after several minutes of intense attack.

They're very lucky their infant daughter was not also attacked.

The Police Department and Animal Control were called out immediately. Macy suffered severe bites and was rushed to the Emergency Vet. They had to put her under anesthesia to have the huge bites sutured up. Macy was sent home on antibiotics and pain medicine.

On Tuesday, December 26th , Ronnie had to rush sweet Macy to the emergency vet again, large amounts of fluid started pouring out of a hole Macy's chest. The vet had to put her under again. 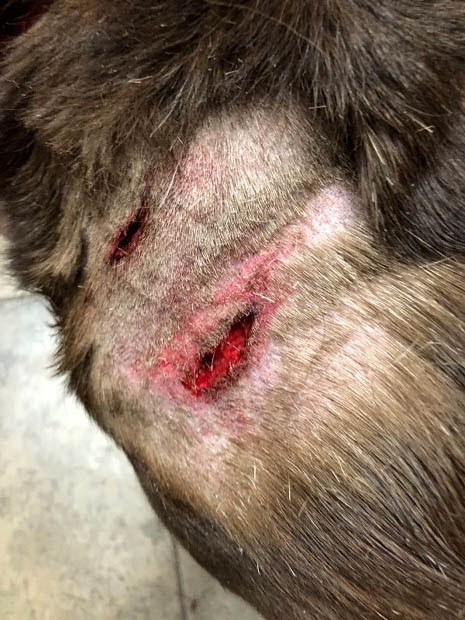 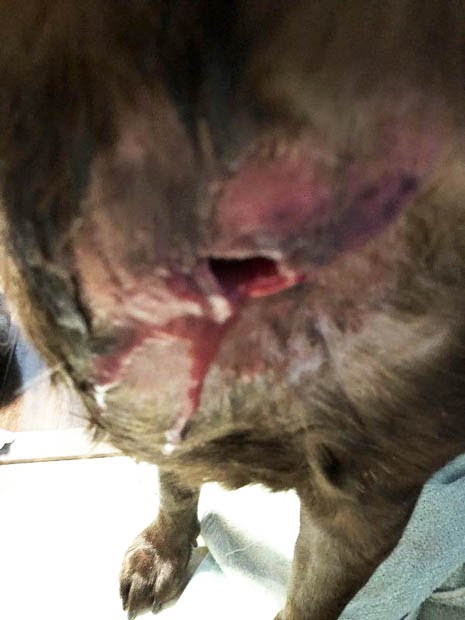 Today, December 28th, Ronnie had to take Macy to the vet again as she was not doing well, she is scheduled to have surgery again this afternoon. They will have to cut her open top to bottom and along her neck and spine, wash the areas out and put in drain tubes.

We are hoping and praying Macy can pull through all of this! Macy is the sweetest and most loving chocolate lab, she's a huge part of our family!

The pit bull's owners have accepted no responsibility for this attack, the pit bull was just running freely. Animal control placed the dog on a 10 day, in house probation....that's it!!!

Oklahoma dog attack laws need to be changed. If the dog had bit Ronnie or Remmington first then animal control could actually do something. 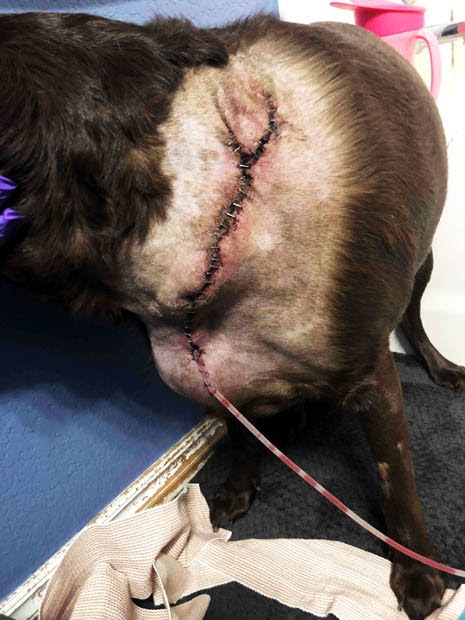 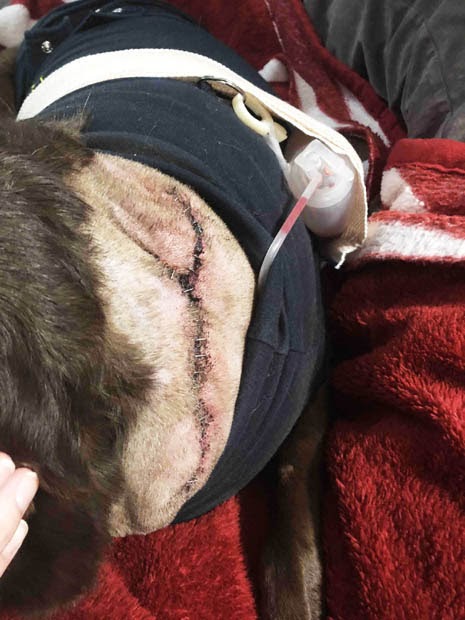 UPDATE - JANUARY 2018
Macy is home today. She has a LONG road to recovery, hopefully this last surgery will begin the road to getting our Macy back!

Update from Ronnie last night
-The Dr called and said surgery was successful. The first culture came back negative for resistant bacteria. The area had pretty bad necrosis from the skin being torn away from the muscle/tendons (avulsions) that she cut out. She has a drain tube and will have to be drained every day or two depending on drainage. Waiting on second culture to come back Saturday or Monday. 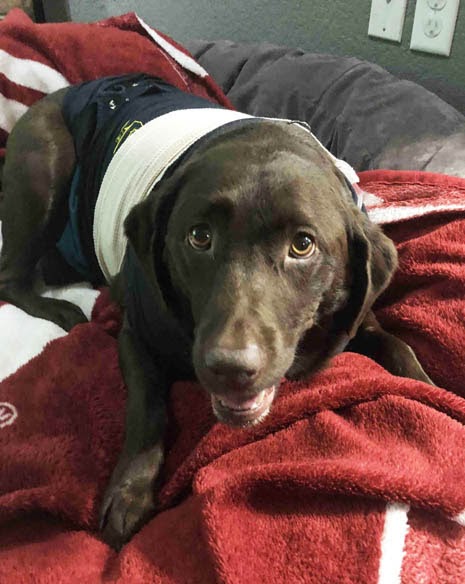 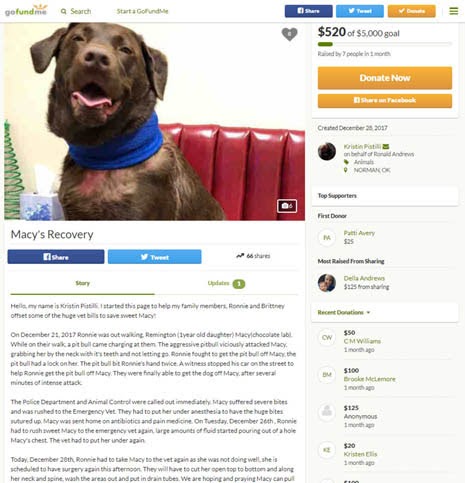 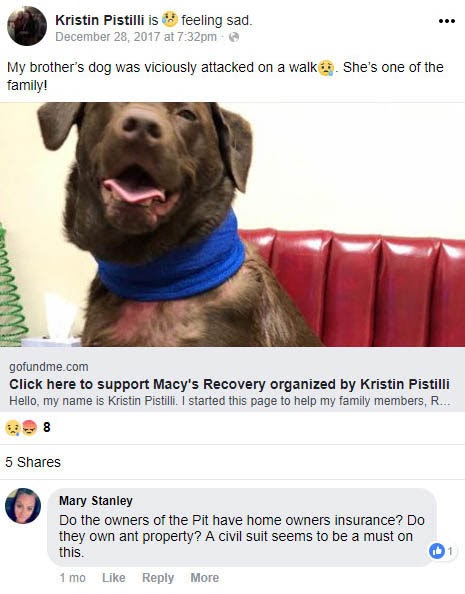 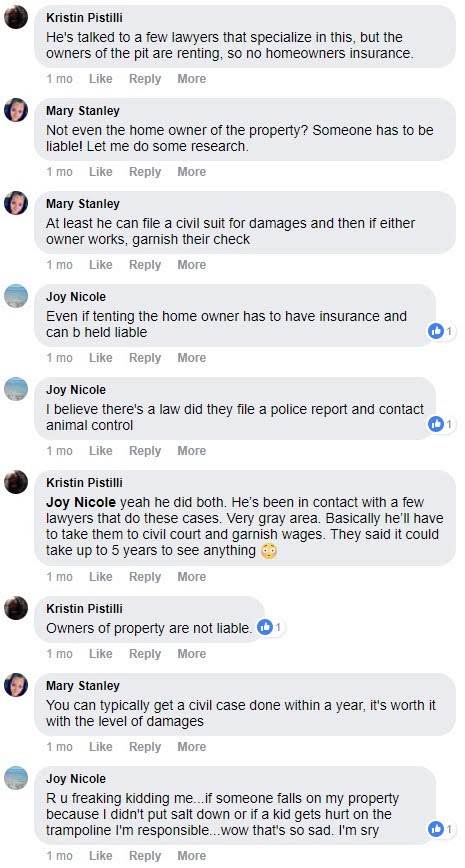 In most cases, a landlord will not be liable if a tenant’s dog attacks someone.

However, there are certain situations when a landlord can be held responsible if a tenant’s dog does cause harm. Please keep in mind that each state has different laws, so it is important to check locally to determine the exact rules that may apply to you.

According to Nolo.com, a landlord could be held accountable if they:

“knew the dog was dangerous and could have had the dog removed; or
"harbored" or "kept" the tenant's dog—that is, cared for or had some control over the dog.”

​1. Knew the Dog Was Dangerous:
In short, if a landlord had knowledge that a dog posed a real threat to others, the landlord could be held liable.

For example: The dog had bitten or attacked someone and the landlord was aware of the attack. If the landlord chooses to allow the animal to remain on the property, knowing that it could be a threat to the safety of all tenants and anyone else who may come in contact with the animal, some states may consider partial blame for any future attack to fall on the landlord.

This liability is usually combined with the landlord’s ability to remove the animal.

2. Ability to Remove the Animal:
Unable to Remove the Animal:
Many states would not hold the landlord liable, even if the landlord knew an animal was dangerous, if the landlord was unable to legally remove the animal. If you have attempted to remove the animal, but the court did not give you legal authority to do so based on state laws or based on your lease agreement, then you most likely would not be at fault for any future attacks. In this situation, however, you should alert all current and future tenants that there is a dangerous animal on premises and put up ‘beware of dog’ signs.

Able to Remove the Animal but Did Not:
In a situation where the landlord had knowledge that the animal was dangerous and had the ability to remove the animal, but chose not to, the landlord could be held liable if the dog injures someone.

For example: The tenant signed a pet agreement that stated if the dog displayed any vicious behavior, the tenant must get rid of the animal or must move-out with the animal. The dog bit someone. This would be considered vicious behavior. According to the pet agreement, the dog and/or tenant should no longer live in the property.

If the landlord did not follow through on this contract, and the dog bites another person, the landlord could be liable. In this case, the landlord knowingly and willingly allowed a dangerous animal that was a threat to others to continue to live in their property.

The theory is that, while the landlord does not own the dog, their negligence contributed to any future attack.

3. Harbored the Animal:
If the landlord cares for the dog as if he or she owns the dog, i.e. feeds the dog, takes it for walks, watches the dog while the owner is at work, then he or she will inherit the same liability as the dog’s actual owner if the dog injures someone. They become a de facto owner.