Texas: Woman has her arm nearly torn off by her Pit Bull mix

TEXAS -- An East Texas woman is resting in a Dallas hospital, looking at a long road to recovery after being attacked by one of her own dogs.

Gregg County authorities say it happened on Monday when officers were called to a residence north of Kilgore where the woman suffered serious injuries. Cheryl Carver of Gregg County, a nurse, is recovering in Dallas Parkland hospital from serious wounds to her arms. 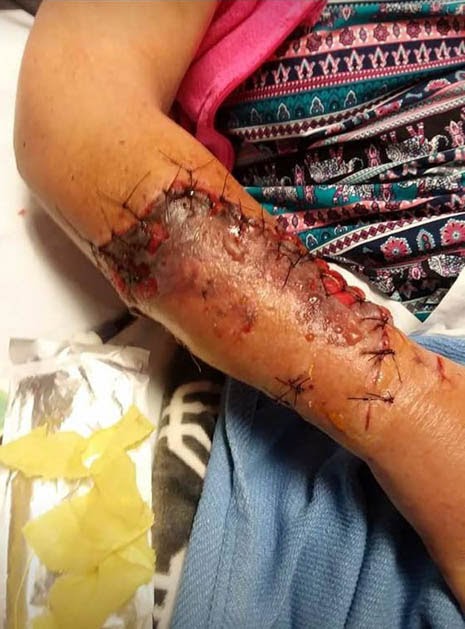 "The neighbor told me they heard her hollering for help. One of the other neighbors rescued her. It was severe, absolutely severe. In fact, she had a small wound on the other arm too," says Fred Killingsworth of the Gregg County Health Department.

County health officials and deputies were called to the scene.

"Upon arriving they found out that the victim's own dog had attacked her," says Josh Tubb of the Gregg County Sheriff's Office.

"Whatever  triggers them, we don't know what triggers them. I don't know if she was trying to feed it, got between it and another dog, she had several other dogs out there. Don't know the cause for the attack," Killingsworth says. 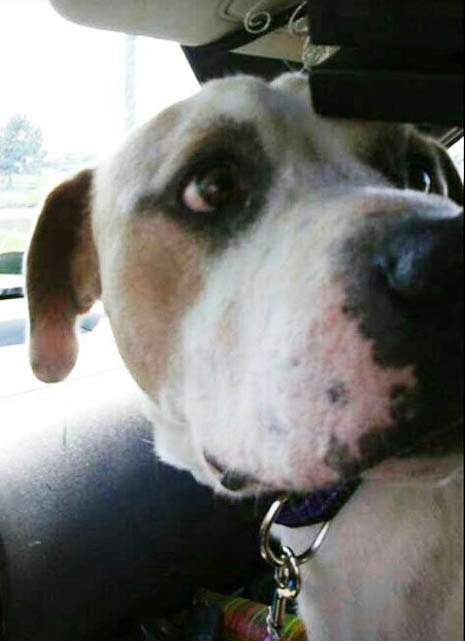 "Neighbors and witnesses’ nearby were able to get her away from the dog and apply pressure to the wound," Tubb says.

"Once EMS responded she was later flown to a Dallas hospital for treatment," Tubb says. 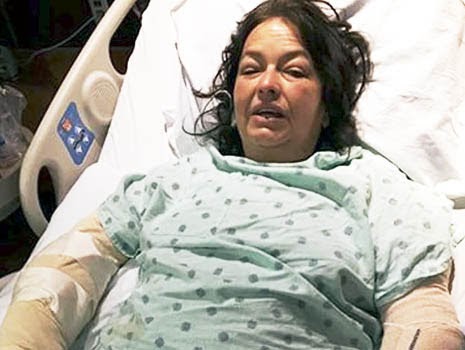 The attacking dog, which is a mixed breed Pit Bull mix, was quarantined.

YouCaring: Dog Attack!!!!
For: Cheryl Carver
Longview, TX
Organizer: Sherry Carver
This is a fundraiser for my mother, Cheryl Carver.  She is a nurse in East Texas.
If you know her, then you know that she is extremely passionate about her dogs and saving every stray that comes around.

Prior to October 2017, she rescued a challenging pit bull. This dog was aggressive, but that only made her feel more inclined to show this abused animal love and care.

In October, this dog bit her hand and broke her finger. She had to have surgery to fuse the bone together. The health department wanted to take the dog, but she wasn't having it.

Despite this, she fought for this dog until she got her way to keep the dog and wanted to continue helping it. I'm sure she blamed herself for being bitten.

A few days ago, the dog attacked her again. This time her arm was almost completely torn from her body. 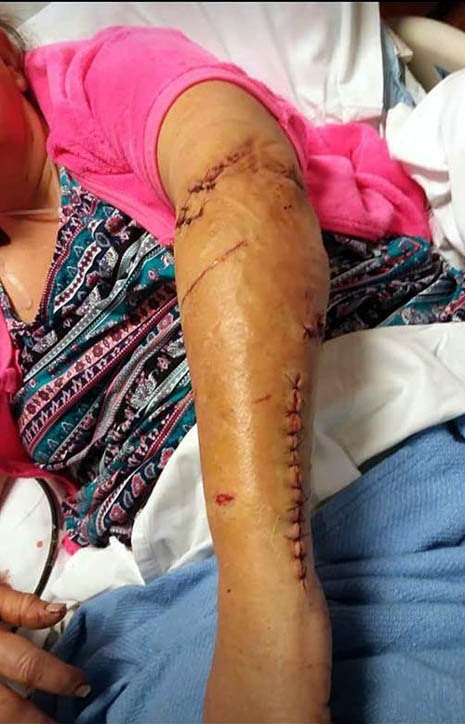 My mother was airlifted to Dallas. She is currently in Parkland Hospital.   She has had one surgery and has another tomorrow. The doctors expect her to be there 3 months. Her 3 forever fur babies will stay with me  and my sisters. She will lose her home, her car, and most likely her job. We will be storing what we can. The medical bills are going to be insane and most likely I will go insane too. I need PRAYERS AND STRENGTH for her.

For my mom,  I promise not to hate all pit bulls because one almost took her life after her saving his two times. 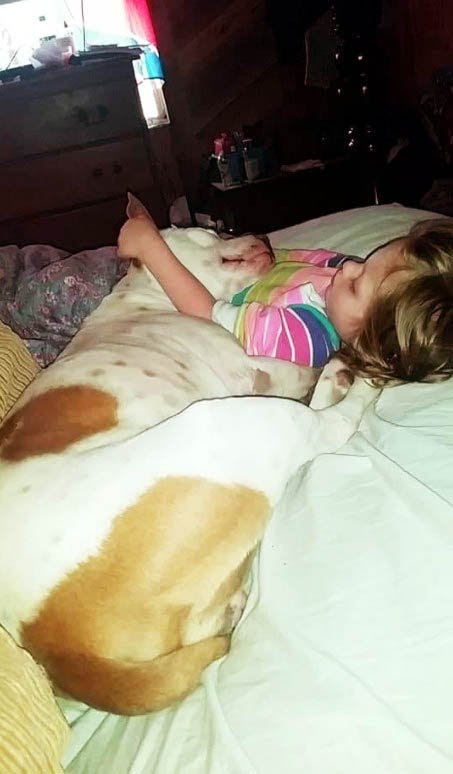 I have cried and asked myself why so many times today??!!! The answer is this, she forgave that dog while she laid there not knowing her own fate. She only thinks about the abuse that was caused to the poor animal to make them react in the way.  This was another rescue. She has a very long road ahead of her y'all. Please please please pray for an easy recovery.  We are letting the house, and possibly the car go and we plan to help her with what she needs and take care of her animals. We are not sure on the outcome of her arm and future use of it, but we are hoping for the best. I LOVE YOU MOMMA. YOU ARE SELFLESS IN A WAY THAT I WILL NEVER UNDERSTAND BUT I WILL TRY. 😥😥😥 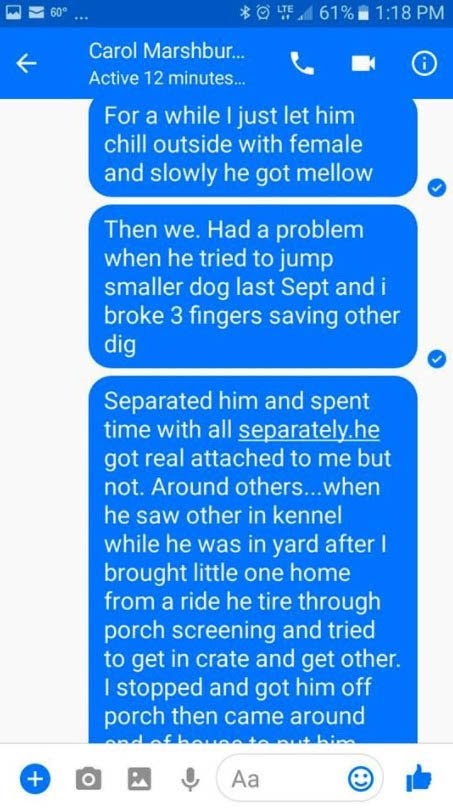 Cheryl Carver posted on Facebook February 11 at 11:46am ·
For the record to be clear. I CALLED HEALTH DEPT AND. PERSONALLY REQUESTED MY DOG THAT ATTACKED ME TO BE PUT DOWN IMMEDIATELY BEFORE I WAS AIRLIFTED WITH MY NEIGHBORS ASSISTANCE. I WAS ASKED IF HE HAD RABIES VACCINE AND ASSURED THEM HE HAD...THEY OFFERED QUARANTINE FIRST WHUCH I REFUSED AND REQUESTED IMMEDIATE PUT DOWN...Make no mistake that this dog is not safe to own by anyone. The KLTV post states he is being. Held for quarantine ...whether that is for positive influence for those faint of heart or actually true I will find out asap and correct if not already done as I requested but again...make no mistake...not safe dog ever...dont learn the hard way like I did. ...i will no longer be rescuing dogs as I always have and I regret I can't but I won't change my mind...I will only own those I already have raised. From birth for their lifetimes then no more....i encourage those willing to continue safely only bit no breed is all bad or all good...depends on us not breed 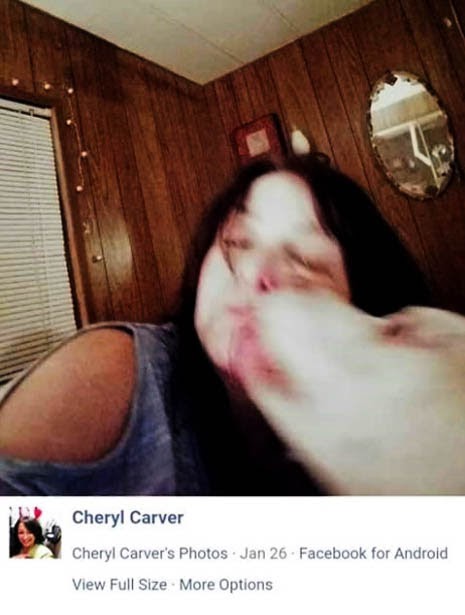 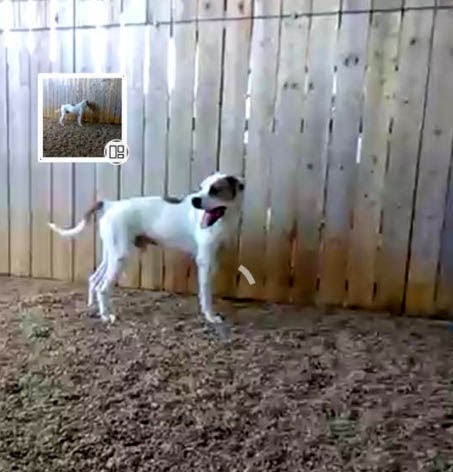 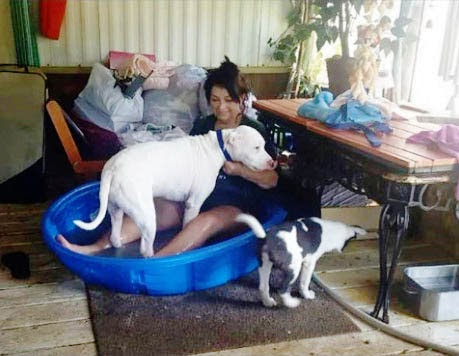 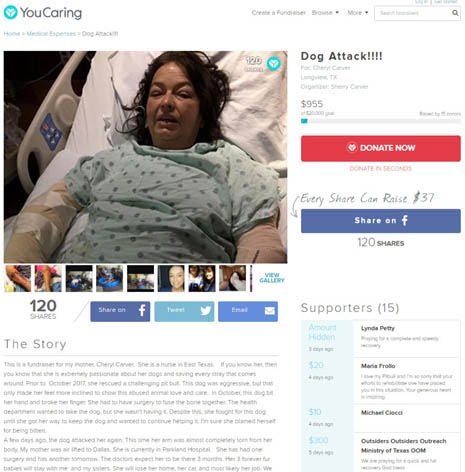 Some sort of drama was going on in the comments... people were telling her not to trust Pit Bulls, that they are inherently dangerous, etc. She or her daughter didn't like that so they had YouCaring delete all the comments. I hope they refunded the people who had donated and who then had their comments removed. 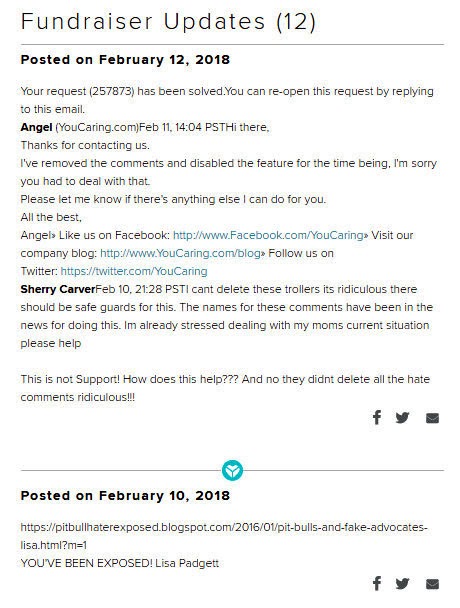