Oregon: Little boy still recovering after he was attacked by a Pit Bull

OREGON -- Watching 2-1/2 year-old Jeremiah Frohlich laugh and play at Medford’s Bear Creek Park on a cold afternoon this week, you wouldn’t know the boy was nearly killed by a pit bull just days after Christmas. 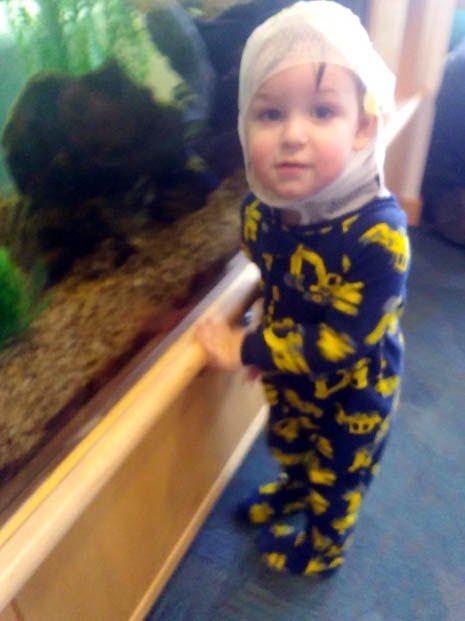 Recently freed from an arm cast and a cumbersome neck brace, the brown-haired toddler was more focused on his tiny trucks and toy dragons than bothered by a stuffy gauze bandage protecting his damaged scalp or his mom’s insistence that he wear a warmer jacket.

Fighting to recover from devastating injuries, the toddler was oblivious to the changes his family has endured during his recovery for the past two months as he played with other children at the park’s playground.

Laughing as her boy raced a tiny car, his mother, Serena Neve, couldn’t help but worry both for her son and her family. 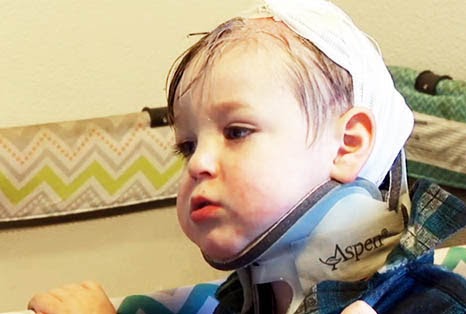 Jeremiah was playing outside with two older siblings when a neighbor’s dog broke free from a dog run and lunged at the boy at his family’s former home in Williams.

His older sister fought off the vicious dog, which was later euthanized, but Jeremiah had essentially been scalped and sustained extensive injuries elsewhere on his body.

The family had already been financially strapped prior to the attack because Neve, who worked as a drug treatment counselor, was on maternity leave after having a daughter who is now 6 months old.

Working odd jobs to generate extra income, Neve got a phone call saying her son was being airlifted to Doernbecher’s Childrens Hospital in Portland. 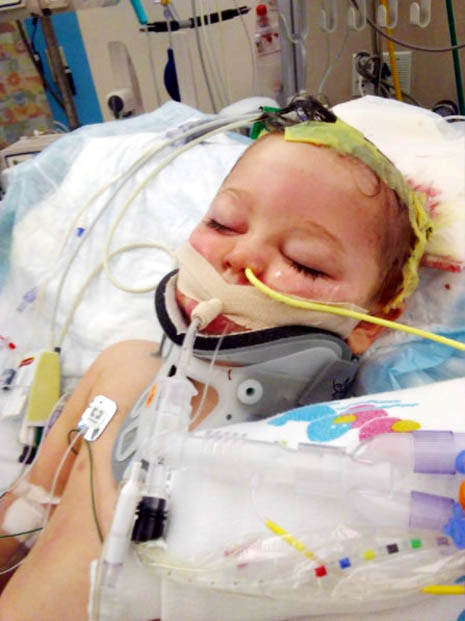 After more than 16 hours of surgery to piece the toddler’s scalp back together, followed by a nearly month-long stay in the hospital, the family returned to the Rogue Valley but still faces week-long stays in Portland every month for tests and procedures.

Jeremiah faces more surgery to move the skin on his scalp in hopes he’ll have a normal appearance and hair on his head.

Unable to return to the home where the boy was attacked, the family of seven is currently split up, some staying with friends in Grants Pass and Glendale, some renting hotel rooms in Central Point.

Neve says she is even considering camping in a yurt while juggling school and work schedules. 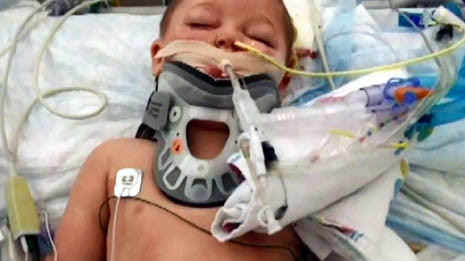 “We’re staying in hotels, which is definitely not cheap. It costs more than rent, so we try to stay with friends when we can,” Neve said.

“My husband works in Grants Pass, and that’s where the kids go to school. I’ve been applying for places to rent, but when property management places find out you have a lot of kids, they don’t approve you. They can’t say that’s the reason, but it’s obvious when that’s why. I’m even signing for a few nights in a yurt for $40 because it’s at least better than $60 for one night.”

Well, property management companies typically won't rent a 1-bedroom or 2-bedroom to someone with 5 kids, but there shouldn't be a problem with a 3-bedroom. Assuming you have 2 sets of bunk beds in 2 of the bedrooms and the baby is in the master bedroom with the parents. It's do-able. After all, remember The Brady Bunch? Three kids in each bedroom. 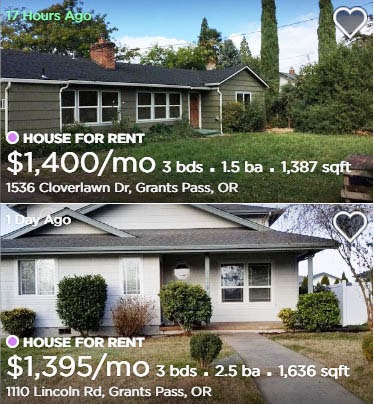 These are affordable rentals available now

While her husband has a good-paying job, living in hotels and other accommodations, she notes, costs more than rent and complicates cooking healthful meals and providing a calm environment for Jeremiah to continue to heal.

Likely, this little boy's medical bills are covered by either Medicaid and the Children's Health Insurance Program (CHIP). Also, the Shriners are known for assisting families with sick, injured children. I'm sure they can help with the week-long stays in Portland that they must do monthly.

What her family has been going through is horrible, but she needs to get a job and they need to use whatever money is left that has been donated to them for a down payment on a rental home. Now. Before it all gets frittered away.

Also, what about the owners of the Pit Bull? Why aren't they paying for anything? This family was living with them when their dog tried to kill this little boy. 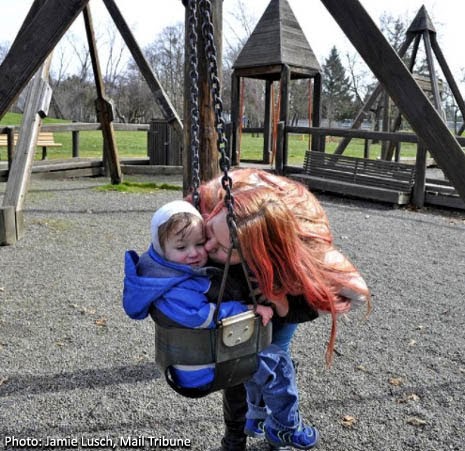 Focused on caring for Jeremiah and getting her family into permanent housing, Neve is unsure when she’ll be able to return to work.

“It’s been a nightmare, and so many things have happened that I haven’t really had a chance to slow down and realize all that our family has really been through,” she said. 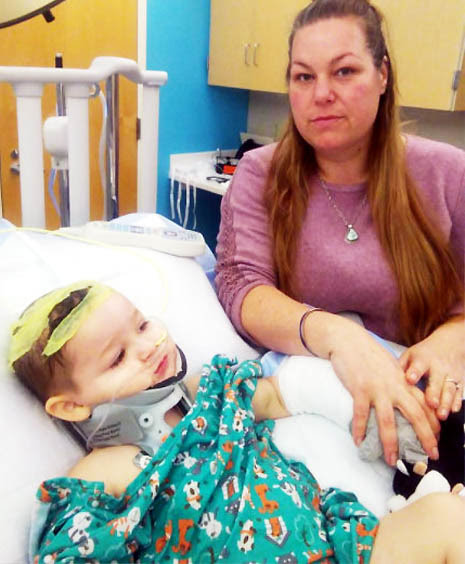 “He had to have a blood transfusion. He had a broken arm. The tendons in his neck were stretched twice the length they’re supposed to be. He was wearing a neck brace until recently. His doctors thought he would need surgery on his vertebrae, but we got a second opinion. It’s really hard to know that people will be able to look at him and wonder what happened to him.

“The hardest part is that after all he’s been through, our family has lost our home,” she said. “It’s been a really trying time.”

Donations to the family have been set aside to cover travel expenses to take Jeremiah to Portland for treatment and to help with deposits for a place to live. She also plans to start collecting hats for her tiny boy. 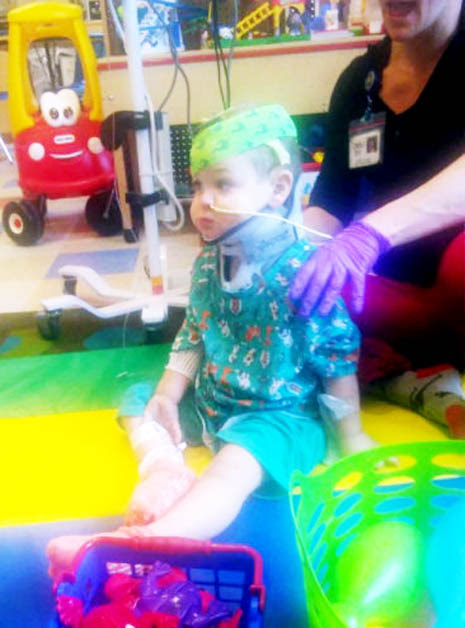 “They can’t do surgery until he’s finished growing, so he’s going to be wearing a lot of hats,” she said. “I don’t want him to have to go through everyone focusing on, ‘Hey, what happened to you?’ I want him to lead a normal life.”

Smiling as Jeremiah pushed a red truck across a wood plank at the playground, Neve said the ordeal has given her perspective and an appreciation for each day with her son.

“He’s a little bit skittish around dogs, which is to be expected, but he’s a happy boy and he just wants to play and be a regular kid,” she said. “Right now the plan is just to find a place to live and be able to provide the care that he’s going to need.” 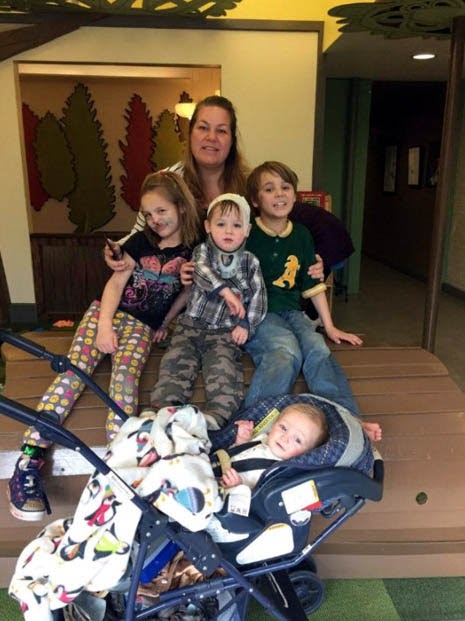 “Our family is really grateful for all the people who have reached out to our family and for all the prayers — they’ve been really important to us.”

They raised nearly $5,000 with a YouCaring donation page 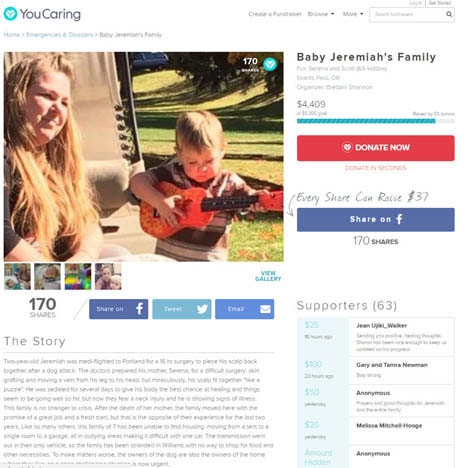 They now have a GoFundMe page started to raise more money: 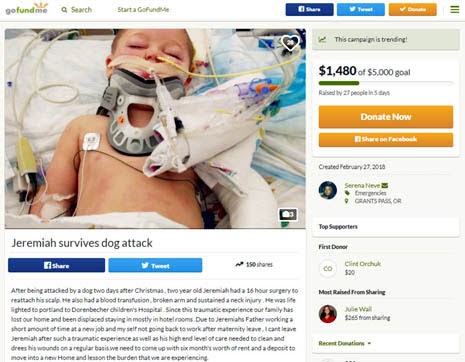