Australia: Bevin Hames, 37, pleads guilty to animal cruelty after friendly Quokka "somehow" got dumped into the ocean and had to swim to shore

AUSTRALIA -- A Christchurch man who was charged with animal cruelty after claims he threw a native Australia animal off a jetty has pleaded guilty.

Bevin Denis Hames, 37, was accused by police of throwing a quokka into the ocean at Rottnest Island, off the coast of Western Australia (WA) on Friday night. 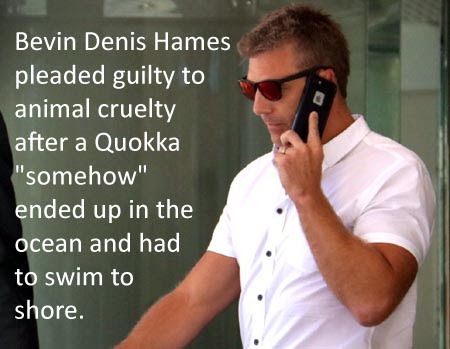 However, in the Perth Magistrates Court on Monday, the man with a zoology degree defended himself by accepting he placed the animal in the water rather than threw it, the ABC reported.

The quokka, a marsupial, swam to shore and a ranger later found it, unharmed, according to The West Australian. 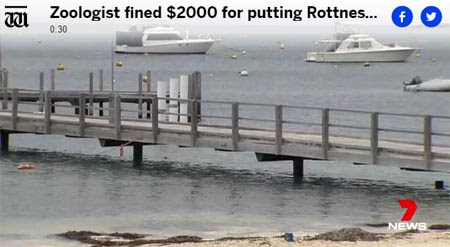 Hames said he had been demonstrating to friends the animals were good swimmers, the ABC reported.

So he found it, picked it up, carried it to the jetty and then he either "placed it into the water" or it "jumped into the water because it was in such distress at being grabbed". Why's he even bothering it to begin with? If it had drowned, whose fault would it be regardless of whether it had "jumped" or been "placed into the water"??? He's an idiot.


His lawyer told the court Hames was not aware he was doing anything wrong and had no intention to. 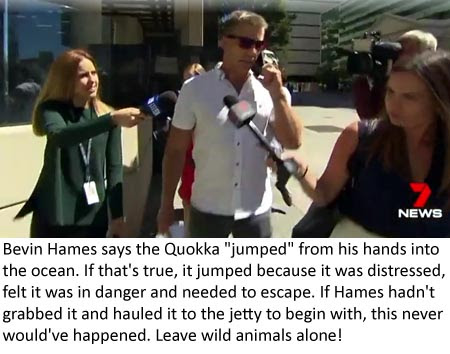 Quokkas are found on smaller islands off the WA coast. Just one small colony exists on the mainland near Albany, WA.

VIDEO: Dr Harry visits Rottnest Island to meet some of the locals – of the furry kind! From kangaroos to fur seals and ospreys, plus the island’s most famous residents, quokkas.