After at least two recent instances of pit bull mixes biting people, Lake County Animal Control has changed its rules so that those adopting the animals know up front whether the creatures have been aggressive at the shelter and whether they’ve been returned by an owner for biting. 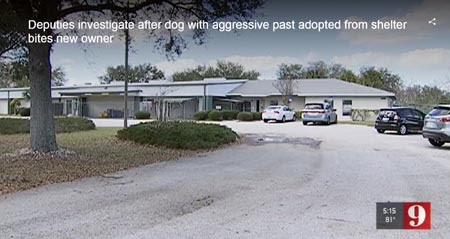 Starting about two weeks ago, the shelter began giving all potential adopters copies of an animal’s record, which includes notes by workers taking care of the critters at the shelter south of Tavares on County Road 561.

Workers don’t tend to be shy in their evaluations. A couple evaluations, for example, had noted, “Not adoptable!!” after they tried to deal with Big Man, a pit mix that still managed to be placed on the adoption floor.

During a "meet and greet" in an enclosed room with Disney mechanic Chris Luhrs and his pregnant partner Julie Grant, the pit bull attacked Luhrs.

The animal kept biting while Luhrs bellowed at Grant, who was pinned in a corner, to get out of the room. Blood sprayed all over, and Grant — a pit-bull lover — started beating on the glass walls to get help.

A worker came running with a mop and used it to beat the dog off Luhrs. 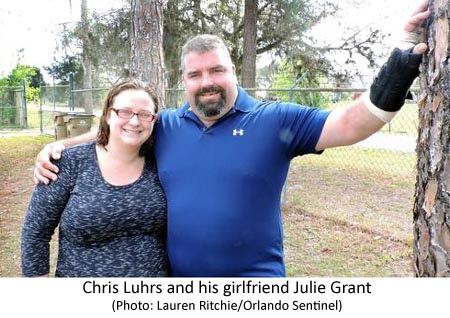 Article: Man recovering from attack by pit bull up for adoption at animal shelter

Grant said a worker had told the couple Big Man the pit bull was “the shelter favorite” because of his calm demeanor, and she mentioned no problems. 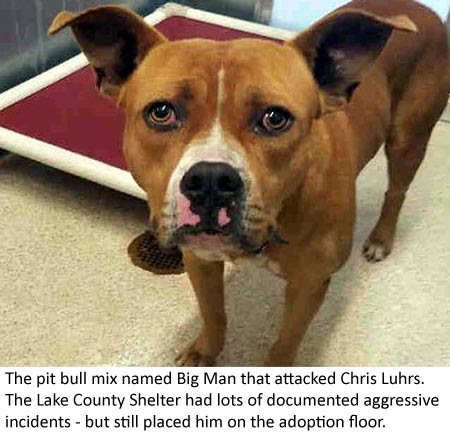 Um, no. Just no. County records show four documented aggressive incidents of threatening shelter workers, including one in which he threw himself at a chain-link fence and gnawed it to get to the person on the other side.

He’d been marked for euthanasia and yet, there he was — loose in a room without an effective rabies shot with a pregnant woman. How did that even happen?

SEPARATE ATTACK, DIFFERENT PIT BULL THAT LAKE COUNTY HAD UP FOR ADOPTION

Knowing a dog’s record also might have helped a Eustis resident who took home a pit mix from an adoption event Feb. 22.

Four days later, the dog named “Heaven” attacked and bit Matt Waldron on his arms after he spoke sternly to her for doing her business in the house.

The animal enforcement officer who came to fetch Heaven noted in her report, “Once I physically saw the dog, I recognized her from Lake County Animal Services due to her documented aggressive behavior while at the facility and her prior aggressive action with our Animal Enforcement Unit.” 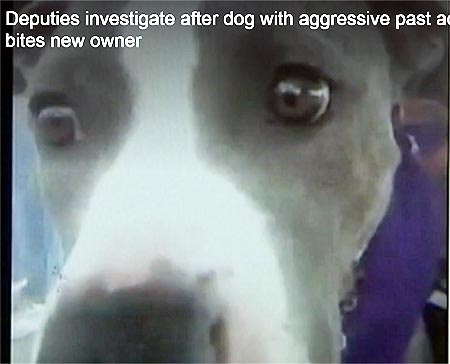 Heaven had been surrendered to animal control for the first time on Dec. 20 because she kept trying to attack the owner’s three children. He requested euthanasia.

At the shelter, Heaven bared her teeth, snarled at people walking by and lunged against the chain link fence. The shelter director labeled her “unadoptable.”

Later, however, the animal consultant helping Lake change to a “no-kill” shelter for $12,000 “evaluated” the dog and saw “no concerns.” So much for the experts.

So has this two-time loser been put down?

Of course not. We don’t want to kill nice puppies. She was shuttled off to an unnamed "rescue" group that probably will pawn her off on someone else.

Let's not forget that this rescue is NOT required to disclose anything to the person who takes the dog off their hands. They can lie and say she was part of a cruelty case and was abused, making the person sympathetic and more willing to take the pit bull.


Saving dog lives is a worthy goal but never at the expensive of people.

Aggressive dogs should not be offered to the general public, but animal control is unwilling to make that hard decision. Instead, the operation has instituted a color-coded warning system.

A green tag on a kennel indicates the dog has no history of bad behavior and all observations from the time the animal came to the shelter are “positive,” said Brian Sheahan, Director of Lake County’s Department of Community Safety & Compliance, which includes Animal Control.

A red/pink tag tells the public that the dog has a “severe” behavior problem and that it would be more like welcoming the Hound of the Baskervilles than Lassie into the house. Still, a person who wants an aggressive dog can adopt it.

Sheahan said allowing aggressive dogs to be readopted “is currently being evaluated.”

So for now, shelter workers ask questions about the circumstances — was it a little nip, a slight snarl? Or did Bruno grab the family cat, break its neck and toss it onto the sofa? They try to determine whether the aggression was a “warning” behavior or something more.

That’s risky. Lake needs to tighten the rules for allowing adoption of aggressive animals. Such creatures shouldn’t be up adoption by the public. 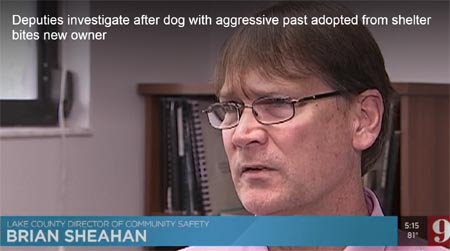 Another change since Big Man attacked in February is that people who want to view dogs are required to sign forms saying they won’t sue the county if the animal rips their face off during visit.

This is just lawyer gunk.

The goal shouldn’t be to avoid legal action while adopting out aggressive dogs. It should be to match safe animals with responsible families.

If the shelter stops recycling vicious dogs, chances are good there won’t be trouble.