Gaston County Police received a tip from a concerned caller telling them to check the welfare of the animals in a home on the 100 block of Antelope Drive in Mount Holly.

Once there, they discovered two kennels holding a couple of hound dogs each.

Two dogs sat in one kennel, the lack of food and water causing them to be in a "severe" medical condition, according to Gaston County Police Capt. Steve Jentsch.

The two in the other kennel had already died from the alleged malnourishment.

"Seeing animals in the condition these animals were found in, it's a difficult environment," Jentsch said. "We never want to see anything like this." 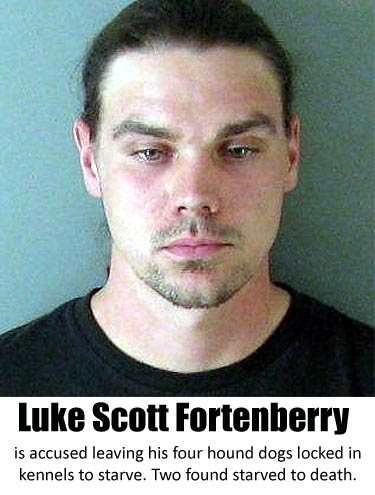 Police charged Luke Scott Fortenberry with four misdemeanor counts of animal cruelty on Thursday, more than a month after police heard about the animals' condition. Jentsch says it was difficult to locate the 27-year-old, who lives on the 600 block of Kilbart Court outside Bessemer City.

The animals were stored at the home of Johnnie Edward McNabb, and authorities have written a criminal summons for his involvement.

The two living dogs were given veterinary attention, then taken to the Gaston County animal shelter. They have since been claimed by rescue organizations, Jentsch said.

"I would encourage anybody who sees an animal they think is distressed to call us," Jentsch said.

Fortenberry was released from Gaston County Jail on Thursday, shortly after posting a $4,000 bond.