OKLAHOMA -- Seth Odell Ragsdale, 21, son of the former agriculture teacher at Muskogee High School, Bruce Ragsdale, has been charged with Felony Cruelty to Animals after almost two dozen cows in his care starved to death, according to law enforcement sources.

Muskogee County Sheriff’s Deputy David Chandler
noticed the dead cows “lined up” at the ranch on Benge Road, half a mile east of Two Mile Road in Fort Gibson, according to an affidavit filed with the case, and other cows laying around as well.

“There were several other cows that were still alive, but obviously in poor shape and could not stand up,” the deputy reported. 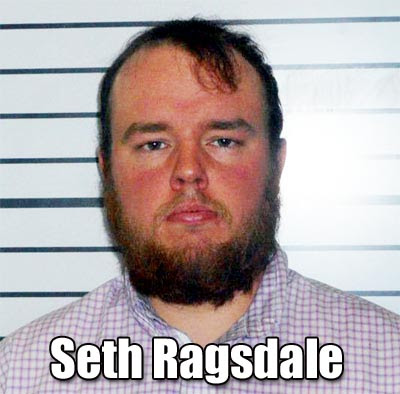 At the time, Chandler counted a total of 20 dead cattle, and he noted in the affidavit the property and cattle belong to Finis Bruce Ragsdale, Melanie Ruth Ragsdale and Seth O'Dell Ragsdale.

Muskogee County Sheriff Rob Frazier said the case is saddening, “because someone’s lost thousands of dollars in cattle, whether accidental or on purpose.”

“And that can not be unseen. Can not be overlooked. It has to be investigated,” Frazier said.

Hey Sheriff Frazier. How about you consider for just a second, the suffering these animals endured at the hands of SETH RAGSDALE. It's not just "SADDENING" that money from butchered cattle that was lost. Living animals that we raise and utilize for food and hides, suffered for weeks before dying. Maybe you should consider that "SADDENING" as well.

Bruce Ragsdale had entrusted the care of the cows to Seth while he and his wife were away, according to law enforcement, but Seth Ragsdale chose to deprive the cattle with feed, slowly starving them to death.

They need to investigate to see if he was provided with money to purchase feed. If so, where's the money? What did he spend it on? Drugs?

By the time officers arrived at the ranch in Fort Gibson, 20 cows were dead. Officials seized 35 more cows, and three more died while they were in official custody.

The rest were returned to Bruce Ragsdale under condition that they not be placed back in Seth’s care.

Bruce Ragsdale is on the board of directors at the Muskogee County Farm Bureau. He better not have paid his brat's bail to get him out of jail.

The charges were filed against Seth yesterday. He was transported to the Muskogee County/City Detention Facility and given a $5,000 bond.

He will be back in court for a sounding docket on April 12. At that time, a date will be set for a preliminary hearing. 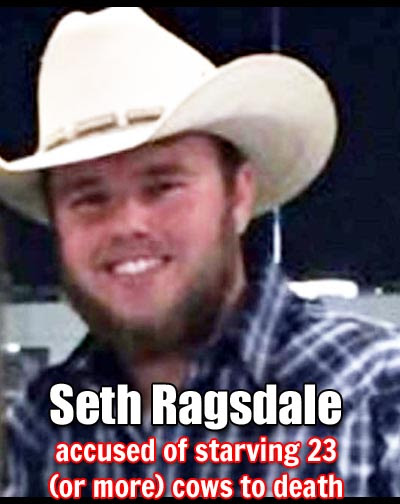 Update:
Seth Ragsdale has continued to fight the Felony Animal Cruelty charges and refuses to accept responsibility for the suffering endured by the animals that we raise for our consumption. Let's lock ol' Seth up in a room and starve him for a few weeks and see how he likes it.