OREGON -- A fire did damage to a house in Pendleton, but the family — and their 20-pound iguana — were not hurt.

Shawn Penninger, the assistant chief of the Pendleton Fire Department, said the department got the call to 2600 S.W. Goodwin Ave. at 4:43 p.m.

Four vehicles initially responded before the department called for reserves and support from the tribal and Pilot Rock departments. 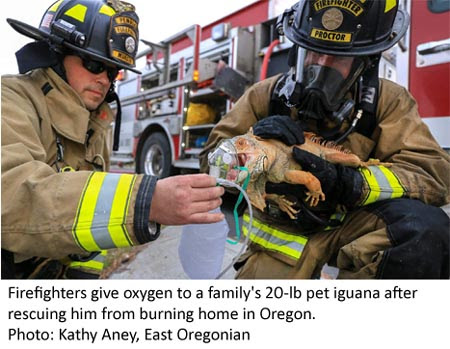 A family of three lives in the house, and only one adult was home at the time of the fire.

Firefighters removed an iguana from the home and gave it oxygen.

Penninger said preliminary investigation shows the cause of the fire was improperly disposed smoking material. Firefighters cleared from the scene after about two hours.