TEXAS -- A Williamson County K9 officer shot and killed a dog Wednesday morning after it attacked a woman and was reportedly advancing toward others.

It happened in North Austin in the Rattan Creek subdivision around 8:45 a.m. while the victim was walking her own dog.

The K9 officer happened to be working overtime to catch people running stop signs when he saw the woman on the ground bleeding.

The officer provided first aid to the woman, and after EMS arrived, he went to find the dog. 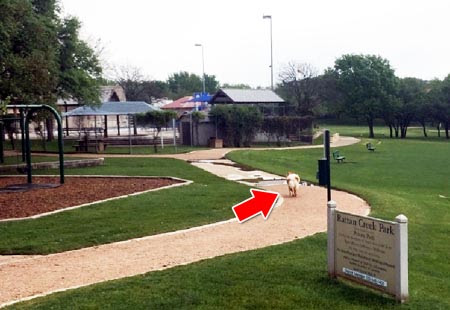 After failed attempts to retrieve the dog, it reportedly headed for another couple walking their dogs.

The officer got between the dog and the couple. At that point, he says the dog came toward him growling. That's when the officer fired two shots killing the dog.

Brent Webster lives nearby and has three small kids of his own who play in Rattan Creek area. He says too many people in the neighborhood don't keep their dogs on leashes.

"So things like this scare me a lot. When I'm at the park I'm definitely on alert," says Webster.

Sheriff Chody says the officer involved loves animals and is very distraught. He says the victim is also shaken and experienced shock.

"When you walk in the park in your neighborhood, you don't expect a dog to attack you and give these serious injuries here. I'm not a doctor, but these wounds, you see them in shooting victims and stabbing victims, not dog attacks," Chody said.

Chody says the dog's owner had a gap in his fence and claims someone stole the dog.

"It made it difficult to believe that someone could come and take a dog that did that much damage," said Chody.

As Chody awaits a decision from the district attorney on whether to press charges ranging from a Class A misdemeanor to a third degree felony, neighbors are hoping the victim heals.

"I hope she recovers quickly and that's a very sad thing to have happened at all," said Jamie McCurdy who lives down the street from the park where the incident happened.

Webster says he hopes this will be a wake up call for everyone.

"Keep your dog contained for the safety of everybody," Webster said.

The woman who was attacked is recovering at St. David's Hospital in Round Rock with serious injuries.