UNITED KINGDOM -- The RSPCA is appealing for information after two thin dogs in a neglected state were found in an isolated country road in Hertfordshire.

The spaniel-type dogs were found by a woman who was driving in Friendless Lane, Flamstead, on Thursday evening last week (16 March). Both dogs had matted fur and were covered in feces.

They were taken to a vet, where they were both on IV fluids for two days. They’re now in the care of the RSPCA’s Southridge Animal Centre. 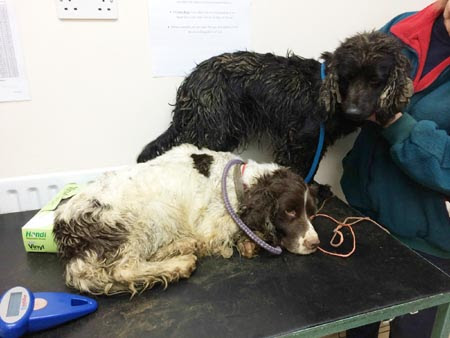 RSPCA inspector Rachel Smith, who is investigating, said: “The woman who found the dogs was driving when she saw what she thought was a badger at the side of the road. The animal wasn’t moving so she got out of her car to see if it was OK.Clyde.JPG

“As she got nearer she realised it wasn’t a badger but actually a liver and white spaniel dog. The dog looked clearly neglected. She got the dog in her car to take to the vet, and as she was doing so, a second dog – also looking neglected and with twine around his neck – came out of the bushes at the side of the road.

“They were both very thin, had faeces all over their bodies and had extremely matted fur.”

The dogs have been named Bonnie and Clyde. It is thought that Bonnie – the liver and white dog – is aged around five, while Clyde – a black spaniel – is aged three.

Additionally, the dogs’ fur was extremely matted, with some of the dreadlocks being thicker than a thumb. 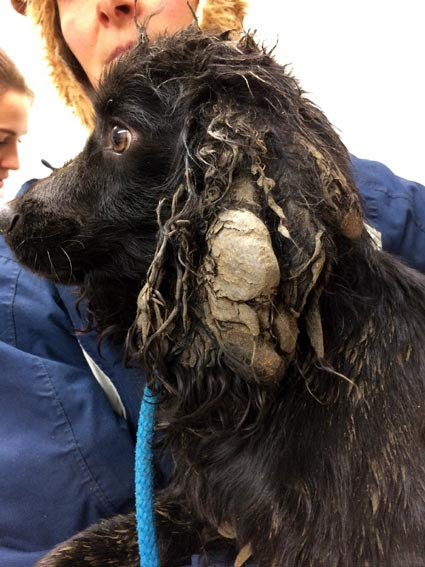 Neither dogs are microchipped so the RSPCA has no way of knowing where they came from. Inspector Smith said: “We are hoping that someone recognises them and will get in touch with us.

“This is an example of why microchipping is important. Since April last year it has been the law that dogs should be microchipped. Bonnie and Clyde may have been stolen or escaped, but we will not be able to find out where they came from without relying on the public to give us more information.”

To help the RSPCA look after animals like Bonnie and Clyde text LOVE to 87023 to give £3 (text costs £3 + one standard network rate message) or visit www.rspca.org.uk/give.