United States: "My friend's Pit Bull attacked one of his owners and their cousin. Should they get rid of it?"

UNITED STATES -- One of my best friends has a Pit Bull Terrier had it for 5 years then it attacked one of his brothers and also his cousin - both of them had to get stitches.

The dad who is the owner says he's getting rid of it if he attacks one more person though he has blamed both the son and the cousin for not leaving him alone and the Mom hates the dog and wants to get rid of it already.

Star_of_Darkness
It needs to be put down. It s a pitt bull, no one should be shocked or surprised that it attacked someone. They always turn no matter what

It doesn't matter what caused the dog to attack, its a pitt bull. it was going to atack no matter what. It needs to be destroyed

Latcho
No it should be shot dead with a single close range headshot through the cranium from above and behind with a pistol not smaller than 9mm. then disposed of because that way it will never bite again.
Meanwhile dumped in a shelter it WILL attack again should it feel the need....And such a dog is easily capable of killing a a human........ That simple

Lorraine
Whatever does happen with this dog 'getting rid' can only be one thing and that is that the dog should be euthanised.

Under NO circumstances should this dog be passed to a shelter or an innocent home without its bite history being disclosed.

GllntKnight
Chances are if the people that the dog attacked, the ER where they got stitches has already reported it to animal control, and will be paying the owner a visit, removing the animal at the owners expense and euthanizing it. Owner has no say in the matter. Both people should also sue the owner for any and all medical bills as well as pain and suffering.

Cosmoctopus
It obviously needs to be put down, this is an old yeller type of situation 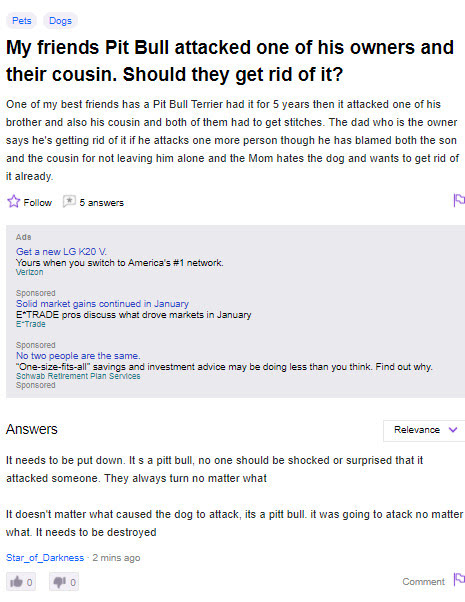 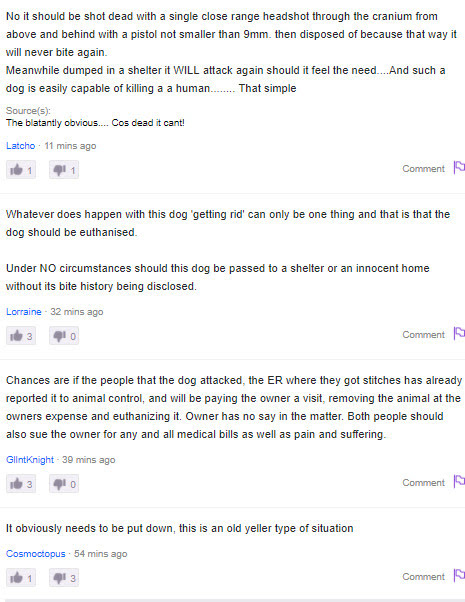