CALIFORNIA -- When Lodi’s Rebecca Knowles decided to take her two dogs Luna and Honey to Vinewood Dog Park for some fun in the sun Tuesday morning, she never imagined that Honey, a dachshund mix, would not be coming home with her.

While at the park, her dog was viciously attacked and mauled to death by two other larger dogs (described as a Pit Bull mix and a Mastiff).

Knowles is devastated by the loss of Honey and still coming to terms with what happened that day. The dog was like a member of the family.

“She wasn’t just my dog. She was our family dog,” Knowles said.

She had Honey for about six years and had purchased her for her eldest son who was 2 years old at the time. Now 8, Knowles said her son took the news better than expected, although she didn’t reveal the details of Honey’s death. 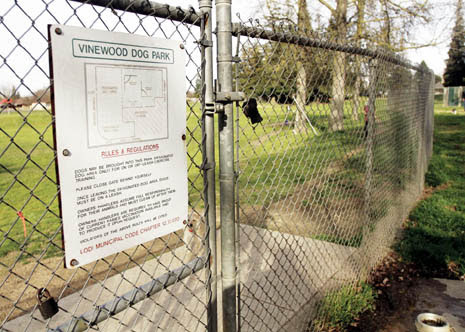 “He cried a little. He asked me what happened but I don’t think that’s something that you tell an 8 year old,” Knowles said. “I know it’s hard for him because he would sleep with her at night, but he’s doing a lot better than what I expected him to do.”

Knowles’ two other children are younger and don’t really understand what’s going on. Knowles said Honey helped her get through some very difficult times in her life, including a stint when she was homeless.

“She was always right there. Every day when I’d get off work, I was staying at a hotel, I would come home and go to my little room and she would just be right there waiting for me,” she said.

Knowles has considered getting another dog to cope with the loss but feels that Honey is just simply irreplaceable.

On Tuesday, Knowles, along with her sister and mother, were in the process of leaving the park when Honey was approached by a pit bull mix and black bull mastiff, Knowles said.

“I wanted to get her out of the dog’s mouth so bad, but I couldn’t. Nobody would help me. I was blacking out. It was just a blur,” Knowles recalled tearfully.

“I just remember the dog grabbing my dog’s neck, and I just thought to myself, ‘I just hope she knows that I tried my best.’”

According to Knowles, the woman tending to the dogs that mauled Honey never stepped in to help and never called their names or even tried to grab their leashes.

“She just stood there and watched. The dogs she was pet-sitting just ripped my dog’s neck open,” Knowles said.

Knowles, along with her sister and her mother, desperately tried to pull dogs off of Honey while screaming for help. Knowles’ mother even sustained bites on her hands trying to pry Honey from the dogs.

“Her fingers were just cut up everywhere,” Knowles said. “I shoved my hand in the dogs’ mouth, and my sister was trying to punch them and kick them. In my head I’m like ‘I don’t want to go to jail if I hurt these dogs but they’re killing my dog. What do I do, how far can I take it?’”

According to Lodi Animal Service Officer Jordan Kranich, he was called to the park between 11:30 and 11:40 a.m. on Tuesday morning, and by the time he arrived the dogs were already separated. The attacking dogs had been placed in the dog sitter’s vehicle.

After receiving witness statements, Kranich took pictures of Honey and the two other dogs for evidence, before placing both of the dogs on quarantine and informing the dog owner of the incident.

“I’m going to get an urn,” Knowles said. “Her birthday is April 11 which is on a Wednesday. I want to keep her ashes. I want to have her with me.”

The dogs that attacked Honey will remain in quarantine for 10 days. After that, If they show no signs of rabies they will be released at the owner’s expense. The owner will have to pay $100 per dog. If the owner does not pick up the dogs within five days of their release, they will be humanely euthanized.

The owner was also cited for not having a current license for rabies on her dogs. The dogs received a strike against them for being aggressive and if another incident happens within a year the dogs could be deemed dangerous, asked to leave the City of Lodi or humanely euthanized.

Kranich said the dog sitter will likely be liable for the attack but the dog owner may be held liable as well.

According to Kranich, the owner of the dogs informed him that she used an online company to get a dog sitter. She alleged that the person watching her dogs told her that the dogs would be staying at a ranch. She did not give the sitter permission to take the dogs to the dog park.

“That park is play at your own risk, and it is an off-leash park,” Kranich said. “You kind of take the risk if you’re going down there and allowing your dogs to run free that there may be a possibility they can get into a fight.”

Kranich said such incidents are rare and that it’s the first time he’s witnessed an attack that led to a death at the park.

Knowles said she has not been in contact with the owner of the dogs because she was advised that is was best not to contact her.

“There’s just so many things that are wrong with the picture, and I’m definitely looking to get justice,” Knowles said.

He said he recommends people not bring their dogs to the dog park if they are not friendly.