NEW MEXICO -- A Portales woman was arrested Wednesday in connection with an August incident in which one horse was found dead and seven other animals were found severely malnourished in Curry County.

Twila Williams, 49, was booked into the Curry County Adult Detention Center just before 3 p.m. Wednesday after she was arrested in Portales. She is charged with one count of extreme cruelty to animals.

Records did not address bond information and it wasn't clear why she was arrested Wednesday, more than six months after the animals were seized. 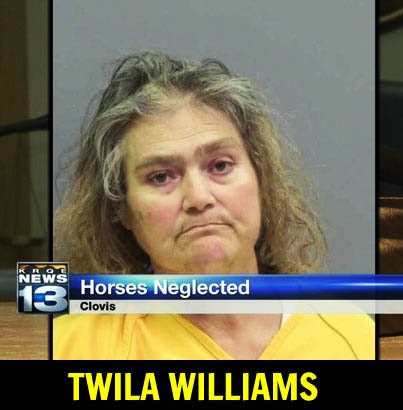 Court records stated that the warrant for Williams' arrest filed on Nov. 16 stems from an August incident in which Curry County Sheriff's deputies responded to a call of two horses that escaped their enclosures near U.S. 60-84.

Deputies arrived to find the two horses, as well as a "severely decomposed" paint stud horse in the back of the property, records show.

Four horses and three donkeys, as well as the deceased stud horse, were found, and the water tank on the property was empty. One and a half bales of hay were also found.

Upon filling the water tank, the horses began "drinking the very hot water and fighting over who got to drink," according to the arrest affidavit.

Deputies stated that the animals were removed from the county, but Williams was unable to be found at the time.

Records show that when the arrest warrant was filed in November, the New Mexico Livestock Board submitted the findings of an exam conducted on the animals after they were seized in August by state brand inspectors.

The paperwork stated that six out of the seven animals "are moderately to severely underweight as evidence by their body condition score."

The charge is a fourth-degree felony, punishable by up to 18 months in jail and a $5,000 fine.