CALIFORNIA -- Chicago is a young, very much loved, Doberman Pinscher, who was needlessly attacked by a Pit Bull dog in a dog park in Temecula, California.

Because of this vicious attack, she now has to have surgery to remove a canine tooth and a partial tail amputation. PLEASE help us raise money for this beloved pet of Sherry and Doug Lacey.

Most of you already know this beautiful Christian couple, Sherry and Doug Lacey from British Columbia, Canada. In December, 2017 they sold their home and began to live the RV life full time, for the purpose of Ministry. 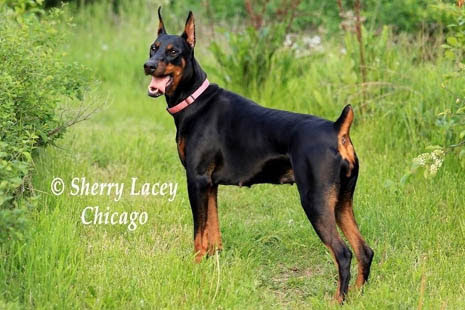 They had two dobermans, Santana and Chicago. Santana had been sick for a long time, but they had prayed she would live long enough to return to the beaches of Oregon, which was her favorite place in the world. She did make it there, but the day they left Oregon, sadly she passed away. Not only was it an incredible loss for Sherry and Doug, but Chicago took it exceptionally hard too.

Sherry and Doug have continued onward, and have worked hard to bless many people along the west coast of California. One place they set up was in the desert in Slab City, CA. In this ministry they were able to love and bless many people living there by handing out supplies, food and water. While in this area a defenseless dog had been brutally attacked by a Pit Bull dog. So they loaded the dog into their car, took him to the Mexican border to an emergency vet office. He was examined and treated and the Lacey's paid for the examination, x-rays, medical care and medicine of this poor dog.

In late February, 2018, Sherry and Doug took Chicago to a dog park in Temecula, CA, where she was attacked by a different Pit Bull dog. However, they did not realize, until they had gotten back home to their RV, that one of her lower canine teeth had been broken. Sherry and Doug took Chicago to an emergency vet and learned that the Pit had also injured her tailbone too! The vet informed her that the tooth would need to be surgically removed and part of the tailbone would need to be amputated.

In the midst of all of this Sherry and Doug had gotten a new Doberman puppy named Journey. Chicago was not accepting of Journey and was showing exceptional aggressiveness towards the little puppy. They thought this was due to her mourning for the loss of her sister, Santana. But they quickly realized that Chicago is in severe and constant pain with the damage to her tooth and tailbone. She is still very young and will be two years old in May. The veterinarian, Dr. Gill from Vail Ranch Veterinary Hospital in Temecula, California, is a specialist. He will be performing the tail amputation and extraction of the canine tooth on March 23, 2018.

It is a very serious amputation which will require two to three months of monitored recovery. It is actually more serious than the loss of a leg due to possible spinal complications if not taken care of properly. She could end up paralyzed. The money needs to be raised and into their checking account no later than March 16, if possible. The above costs have been conservatively estimated to be around $3,400. However; following the surgery, Chicago will need to be seen in the office several times to monitor her healing, possible infections, security of the stitches, follow up blood work and spinal function. These will be added expenses which are not listed above.

So to help offset some of these costs, I am praying that we can raise a minimum of $4,000, or more, to give to this wonderful, loving, giving Christian couple. I had to beg Sherry to let me set up a GoFundMe account to help Chicago. She told me that her dad, and many of you, were also telling her that she needed to ask us for help. Many people have stated they are willing and able to contribute. With the money we raise it will enable Sherry and Doug to continue with their Ministry of helping people in need. The Laceys ministry in the USA can be followed through their blog at: www.knightrider360.com

PLEASE SHARE this with your friends and family and help us RAISE THESE FUNDS by March 16, 2018! Thank you and may God bless you all. 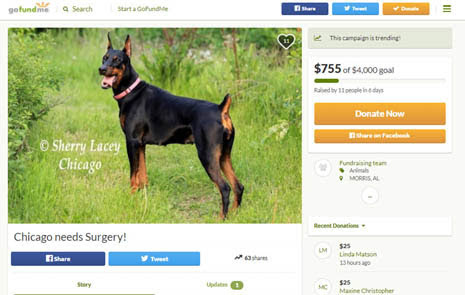