Nebraska: Woman beats her Pit Bull with baseball bat after it attacks her; police Taser it to stop attack

NEBRASKA -- A pit bull that attacked a woman at a north Lincoln home early Tuesday remains on the loose, a police spokeswoman said.

The dog became aggressive inside the home, in the 1700 block of North 31st Street, at 12:45 a.m., Officer Angela Sands said. A 25-year-old resident there grabbed a baseball bat and began hitting Zeus the pit bull in the head after it bit her hand and chest, Sands said. 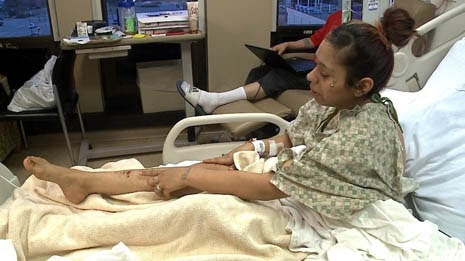 The dog then latched onto her leg and wouldn't let go after she hit it about 30 times with the bat, Sands said.

The woman and her husband tried to get the dog out of the house as police arrived, she said. Zeus was still biting the woman’s leg, so officers stunned it with a Taser, and it ran off.

Hmm, if they'd simply shot it and killed it then it wouldn't have run off...

The woman was driven to the hospital with non-life-threatening injuries.

The 2-year-old white pit bull is believed to be injured and remains dangerous, Sands said. Police do not have a photo of the dog.

Anyone who encounters the dog should call Animal Control at 402-441-7900 and should not approach it.

Animal Control officers have found the 2-year-old pit bull that attacked his owner at her north Lincoln home early Tuesday.

Zeus was found near his home in the 1700 block of North 31st Street shortly after 10 a.m. Thursday, said Animal Control Manager Steve Beal. 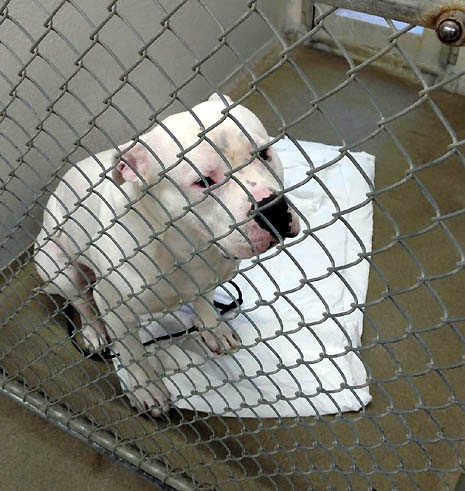 His officers are investigating why the dog bit and latched on to one of his owners, who then hit the dog 30 times with a baseball bat.

The dog didn't let go until police arrived and stunned it with a Taser, Officer Angela Sands said.

Zeus did not appear injured from the incident when he was turned over to officers Thursday, Beal said. Officers took the dog to the Capital Humane Society, where it will undergo a 10-day bite quarantine to assess whether it shows symptoms of rabies.

Animal Control had no previous bite reports for Zeus.