CANADA -- A mid-morning walk on Sunday led to a trip to the hospital for one Grandin woman after she was attacked by a dog.

58-year-old Kathleen Kent and her 30-year-old daughter were out walking along Granite Avenue towards Grandin Road when they were approached and attacked by two pit bull dogs on the loose.

“They heard dogs approaching from behind on the other side of the street. They turned around and these dogs were aggressive and came after them. They started trying to clap their hands and scare them and keep them away but they were intent on more than that, I guess,” explained Kent’s husband, Neil. 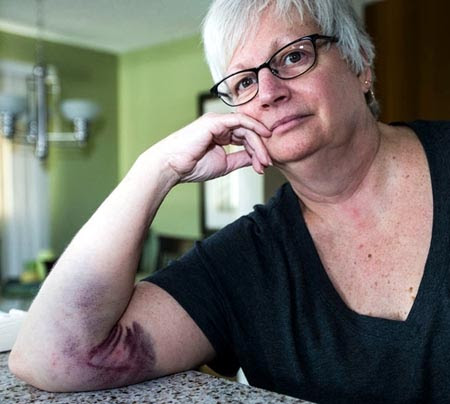 “There was a larger one: solid, full-grown, I guess. It got my wife’s arm in the right elbow area. The other one was just barking and growling. My daughter tried to keep them away. Eventually, it let go and they came home.”

Kent was wearing a thick sweater with a heavy nylon jacket overtop. A photo of her injuries taken upon her return home shows a large swelling near her elbow but no blood. The couple reported the attack immediately to the RCMP and she was treated for her injuries at the hospital. No stitches were required.

“If someone looks at her arm, it’s amazing there’s not. There’s no stitches but only because of that nylon jacket.”

At the same time as the attack, people who lived on the street noticed a vehicle driving around. It eventually picked up the animals.

Jason Alaeddine, an officer with St. Albert municipal enforcement services, said that the owner of the dog was located and charges are pending. Tickets were also issued for both allowing a dog to chase, bite or cause injury and for failing to have the dogs on a leash.

He reminded people to always keep their dogs secured in their yards or on leashes everywhere else, except in the city’s off-leash areas. Even there, the owners are responsible for their pets.

“You cannot predict it. Each dog has its own behaviors.”

According to provincial regulations, any dog that bites or attacks a person must be quarantined for 10 days.

As for Kathy Kent and her daughter, the event served as a firm reminder to always be aware of one’s surroundings when out in public.

“They’ll be hesitant to go for a walk in our neighborhood, I’ll tell you that,” Neil Kent said.