MICHIGAN -- Thanks to an alert couple — or perhaps more accurately their chocolate Labrador retriever — police and animal control officers rescued a dog trapped on the banks of an icy creek.

At about 6 p.m. March 16, Dan and Cathy Korycinski were walking their dog at Beaver Park, in the area of 12th Street and Goddard, when something strange happened.

In a scene reminiscent of a Lassie movie, the dog alerted the couple to something that was going on by the creek, “hauling” them to the creek’s bank, where they spotted the German shepherd. 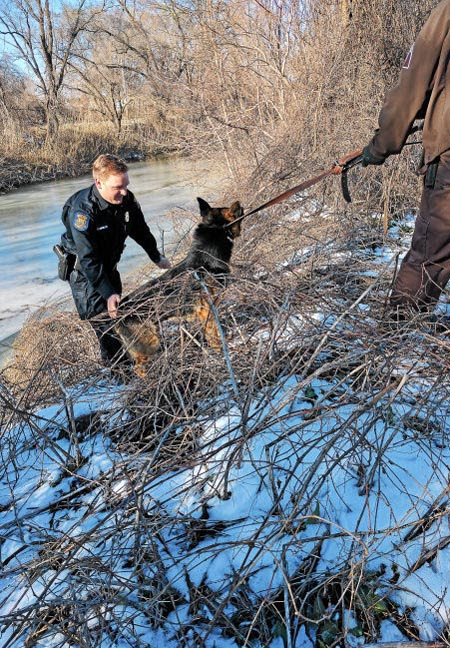 “He looked exhausted and cold,” Cathy Korycinski said. “My husband took our dog home while I waited for the officer to arrive. I always carry dog cookies in my pocket while out walking and tried to coax him up with them, but he seemed too tired to care. He did have a leash on and we couldn’t tell if it was tangled in the brush or not.”

Korycinski said within 15 to 20 minutes after talking to Wyandotte police, a Lincoln Park animal control officer showed up and assessed the problem. The area is covered with brush and is hard to access.

“He called in for help and within minutes three more officers showed up, from both Wyandotte and Lincoln Park,” she said. “One of the officers went down the bank and was able to get hold of the dog’s leash and working together with the other officers was able to get the dog up the icy and slippery embankment.”

Officer Chris Sawmiller went down the embankment and nudged the dog upward, as Wyandotte Animal Control Officer Chuck Gillenwater and two other officers assisted from the top of the embankment.

Police said the dog had a belt around its neck, serving as a makeshift leash, but no license or other tags identifying who it belonged to.

According to police, the dog was very thin, but otherwise appeared to be in good health. It was taken to Downriver Central Animal Control’s intake facility.

Korycinski said she and her husband could not simply leave the dog there, so they were glad when the officers responded.

“When they got him up, he licked their hands,” she said. “He was probably grateful, and they carried him to the truck. He is a beautiful dog. Thanks to these guys that dog will have a warm place to sleep tonight.”