COLORADO -- A pet dog that made international headlines after being seized from his family and accused of being part wolf is finally being allowed to return home.

Animal control officials in Aurora, Colorado, picked up the dog, named Capone, in February after he hopped his backyard fence and a neighbor complained. Officials refused to return him to his family, saying Capone’s appearance and demeanor indicated he could be a dog-wolf hybrid, outlawed in Aurora.

Owner Tracey Abbato said the allegation was ridiculous. She said she adopted Capone 10 years ago from a county shelter, where she was told he was a German shepherd mix. But even so, animal control officers wouldn’t return him without a DNA test. This week, Capone’s owners received the good news that a DNA test determined he was just a regular dog. 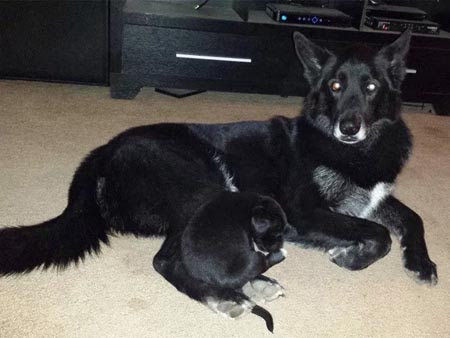 “He doesn’t have an ounce of wolf in him,” Abbato told KDVR on Sunday after learning of the test results.

However, there were still a couple of other issues. For one thing, the neighbor who complained about Capone said he was “acting aggressively” toward her in her yard, Aurora Animal Services spokesman Michael Bryant told HuffPost. That allegation, combined with Capone’s escape, led to several charges against his owners.

Capone was freed, and returned home Wednesday after receiving a license and a rabies shot. His owners are required to construct a six-foot fence around their yard, and to confine Capone inside — or keep him on a leash — until it’s completed.

“We believe this resolution strikes a balance between keeping the family and their longtime pet together, and addressing the safety of the community as a whole,” Animal Services manager Jenee Shipman said in a statement.

She added that the department has “appreciated the outpouring of concern for Capone.”

I think they may have dropped the "aggressive animal" charge - not because the dog wasn't perceived as being aggressive while it was running loose, but because of the whole case blowing up. They could have DNA tested the dog and released it back to the owner with judge's order to comply with the results (sending to a sanctuary/rescue if the results were positive for wolf mixture). My point is, don't discount a witness' claim just because they weren't bitten/mauled and because you read that they 'dropped' the aggressive dog charge, which would have let them keep the dog but with restrictions.

This video shows how scary it can be to be attacked by a dog. I don't think the officer in the video was bitten, but having large dogs chasing you, jumping on you and trying to bite can be terrifying.