Brandi Pybus-McCoy, 41, Nicholas Luciano, 29, Samantha Crain, 22, and Zachariah McCoy, 22, all of Hogansville, Ga., were charged with two counts of first-degree cruelty to children, two counts of deprivation of a minor, and one charge of unlawful dumping of human waste. 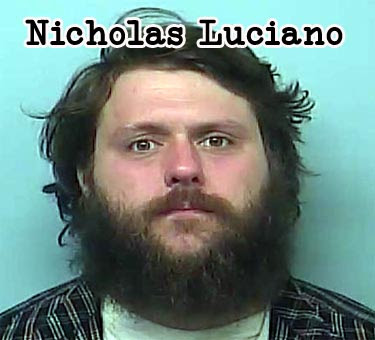 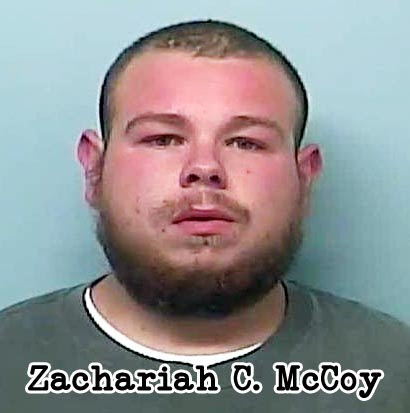 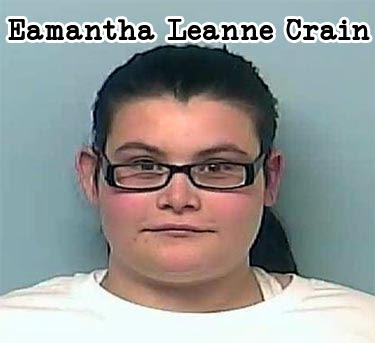 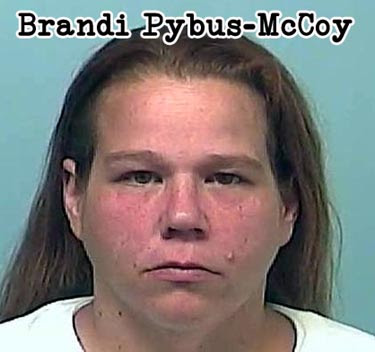 More than 30 cats and dogs, one potbelly pig and two children were removed from a Mountville-Hogansville Road home, where a couch, toilet and trash was strewn across the porch, earlier this month. 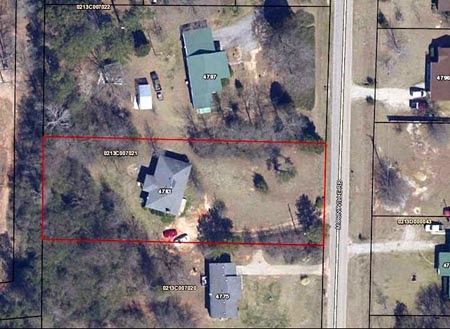 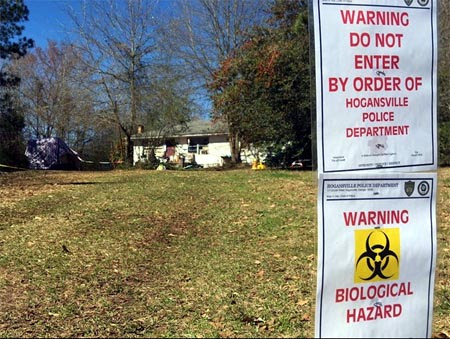 When police responded to the address on an anonymous "animal and unsafe conditions" complaint, they spoke to residents and found the residents living inside the house and a small camper trailer in the driveway. The camper has been condemned, police said.

On Thursday morning, all four of the defendants appeared in court for a probable cause hearing and bond consideration.

Crain and McCoy, who were living on the property in a camper with their two children, appeared in court alongside their attorney, Rod Skiff.

Skiff told the judge that there is no risk of re-offense and no risk of flight risk, requesting bond for them both. As photos are shown in court depicting the living conditions, he argued, that it was a case of “extreme poverty,” and that he took issue with the cruelty charge. 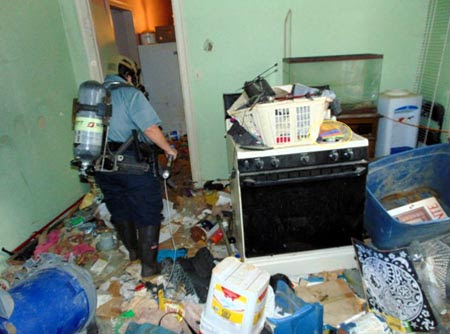 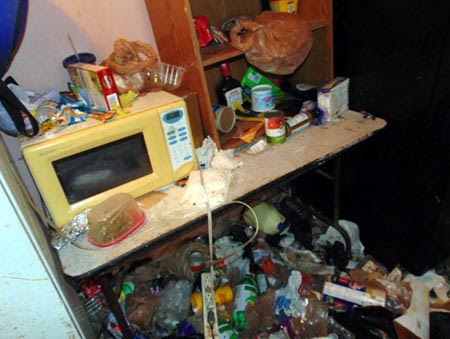 “I think the cruelty first statute requires a willfulness or maliciousness that I don’t think is going to be proven at a trial,” Skiff said.

“It’s very clear that the resources that these people had were not there. With regard to that, I don’t believe these people picked their condition. I don’t think that they picked for these two children to live there. So, going back to the evidence of willful and malicious intent, I think it’s a stretch.”

And while, he admitted that the living conditions were “disturbing,” he said, “a lot of people live in impoverished situations, and I don’t’ think that gives rise to a level that they’re intentionally or maliciously harming their children. It’s a very sad situation, a very disturbing, but… cruelty and first-degree counts, with regard to the children, isn’t warranted at this point.” 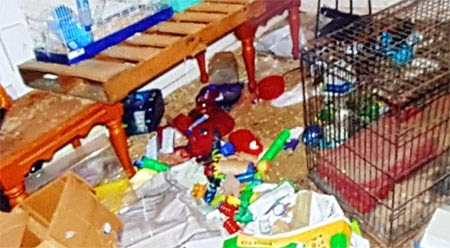 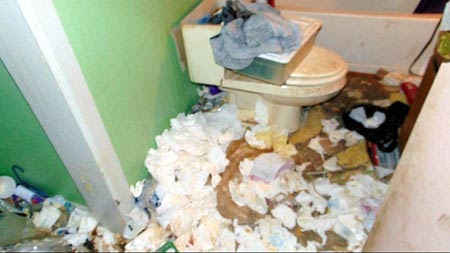 Sgt. Jeff Sheppard with Hogansville Police Department was disgusted with the attorney’s comment about poverty and said that it would offend anyone who is poor.

Being poor and being filthy are two different things, he said. 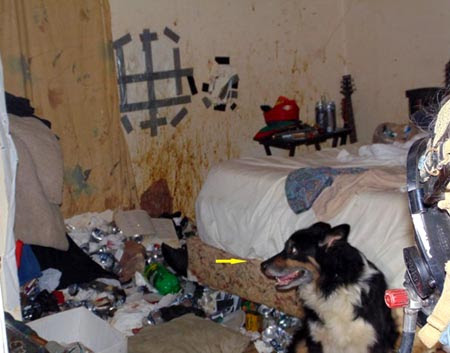 He said that he plans on handing the case over the Troup District Attorney next week.

The Hogansville Police Department seized 31 animals from the home located at 4783 Mountville Road, in Hogansville, Ga., on March 7.

In addition to the filth and human feces, there were pigs, cats, hamsters, rats, rabbit, chicken, cats, dogs, turtles inside and outside the home, police said.

“I've been in public service for 20 years, and I've been in all aspects–fire, EMS, the prison system and police, combined with 13 years of military. This is the worst house I've ever walked in. Ever. I cannot describe to you the smell, the condition of this home,” Sgt. Jeff Sheppard said. 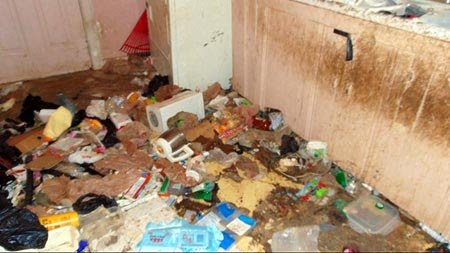 When authorities entered the home, they had to wear air tanks and protective clothing because of the smell and conditions inside. The water had been turned off weeks ago, at the residents’ request, because of a possible water leak. There was a large amount of human waste and trash, both inside and outside, and may be due to the leak. 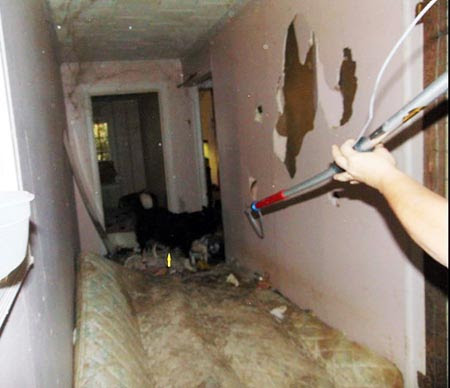 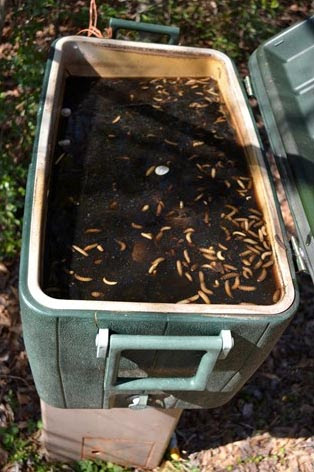 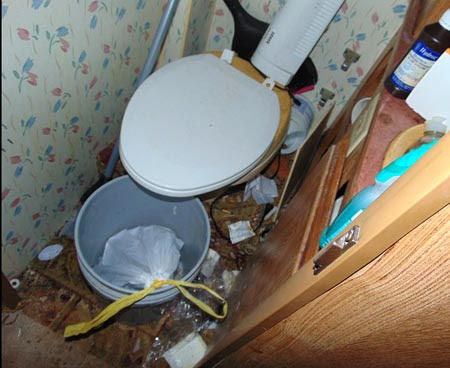 “There are literally thousands of spiders… roaches, other bugs, we found human feces, human and animal, strung throughout the house.”

“It really is heartbreaking,” Sheppard said. “What really concerned us is mangled in all of this were children's toys, high chair, crayons.”

There was not adequate food, he said, and there were open containers of alcohol within reach of the children, and a 5-gallon bucket filled with human feces. 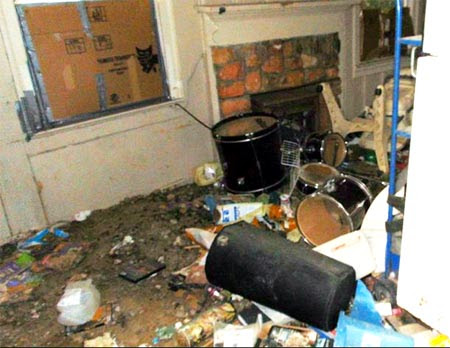 The Troup County Department of Family and Children Services took the 2-year-old and 7-month-old into protective custody.

According to police, the grandparents had been renting the house for several years and the younger couple and children, moved into the camper several months ago.

The two children, who were living in a camper on the property, are currently living with their other grandmother, Crain’s mother, their grandmother. 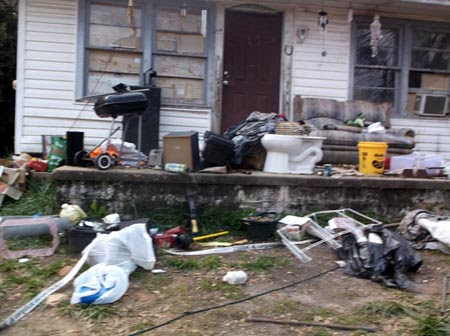 One of the police department’s detectives adopted the pig and chickens, living on his farm. The other rescued animals are living at the Troup County Animal Shelter or have already been adopted.

Crain has posted bond. The other three suspects remain in jail. 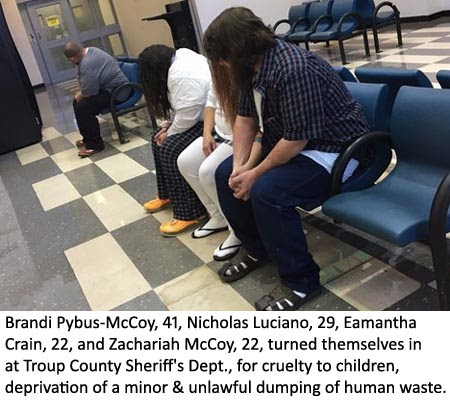