MARYLAND -- Howard County Animal Control is pleading with the public for information about a heartbreaking case of animal cruelty.

Over the weekend, a 10-week-old puppy was left to die on the side on the road. But now, thanks to one family, the puppy who has been nicknamed “Eddy,” is responding well to treatment.

The 10-week-old pit bull puppy was found malnourished, missing fur, and barely clinging on to life in a Columbia neighborhood over the weekend.

“I’ve been here 44 years, I haven’t seen anything like that,” says one neighbor. 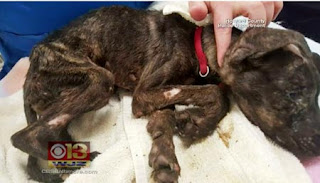 An act of such despicable animal cruelty, many couldn’t believe the condition the pup was found in.

“Basically, it looks like someone starved the animal to death.”

The puppy was found trapped inside a plastic bin, covered in its own filth and open wounds.

The person responsible left the covered container off Braeburn Road.

The container had holes poked in so the pup would have some small access to air, but he was left without food or water.

WJZ found and spoke with the family that gave the puppy a second chance at life, by giving it the water it so desperately needed.” 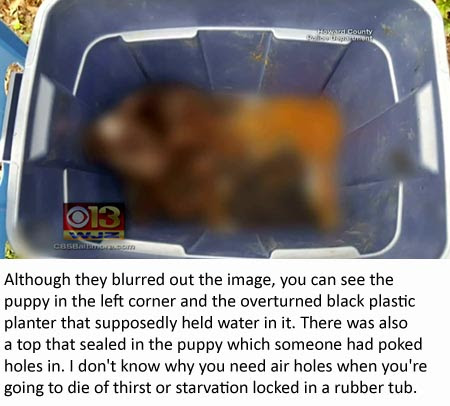 “He was so weak, but he stood up and he drank the water,” says Jill Eberhart and her son, Thomas.

Jill and her son were the first to notice the out of place container. The two stayed with the puppy until animal control arrived.

Understandably, the question on their minds like many others: who would do such a thing?

“What’s it take to give an animal some water? We don’t live in a war zone here,” says Jill.

Animal control is now actively searching for an owner or the person responsible.

“We really are depending on the public to take a look at these photos think about someone you might know who had a puppy that doesn’t at this time,” says Sherry Lewellyn, with Howard County Police, 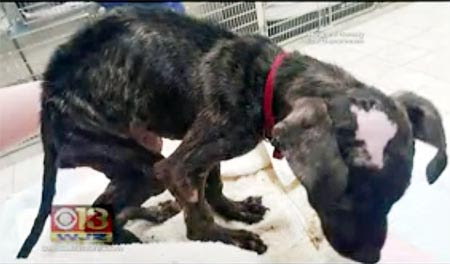 Eddy has been responding well to treatment, and the shelter has already gotten requests to adopt the dog after he completes his lengthy recovery.

Authorities are asking anyone with possible information about the dog’s owner and/or the person who discarded him to call animal control at (410) 313-2780 or email animalcontrol@howardcountymd.gov.