United Kingdom: Neighbors hear man screaming for help as his pit bull attacks and kills him inside his apartment

UNITED KINGDOM -- Neighbors heard the disturbing screams of a man shouting 'get the dog off me' as he was mauled to death by his Staffordshire pit bull terrier in front of a BBC camera crew.

The man, named locally as Mario Perivoitos, was taken to hospital after the attack on Monday last week, but died two hours later.

The 41-year-old was inside the flat in Wood Green, north London when he was attacked at about 10.30pm.

Neighbours said his pet pit bull was a 'good dog', but that Mario, of Cypriot heritage, was a troublemaker and would often bring back people and cause a lot of noise and disorder. 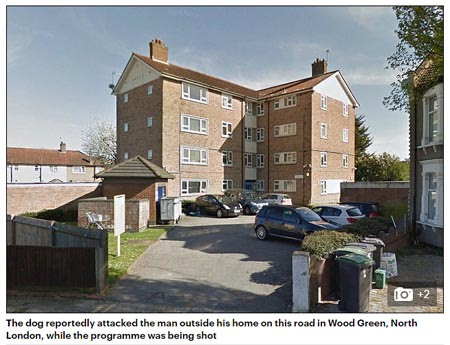 But despite reports about a BBC crew interviewing him when it happened, they knew nothing of a film crew being present at the time of the attack.

They said Mario used to live with his Cypriot mother who is now in a care home.

He was handed a three month Closure Order at Highbury Corner Magistrates' Court last month preventing him bringing anyone else back to the flat.

A copy of the order, which the police applied for, remains taped to his front door.

The order was made to prevent 'the behavior, nuisance or disorder from continuing, recurring or occurring'. And it prohibited access to the property for anyone but Mario between February 22 and May 21.

A neighbor, who asked not to be named, said: 'I knew him for six years but we never talked with him. I heard noises, but I didn't see anything to be honest. It happened last week at night time. It was about 10 o'clock or 11 o'clock.

'It was inside his flat. There was a lot of noise. There was banging, shouting, banging doors, someone calling 'Mario, Mario'. I didn't see anything to be honest, I just saw him on the floor, outside the door. In front of his door. I don't know how he came out, nothing.'

They added: 'I knew his mother. His mother lived here with him. She has got dementia I think. I think he was from Cyprus. His mother is in a care home. I don't know her name. She is nearly 60.

They continued: 'Since I came here, I think he was a drug dealer.'

Referring to why the closure order was made, they said: 'Because he was noisy always. He would bring people here, girls shouting, fighting always. For three months he wasn't allowed to bring people in. 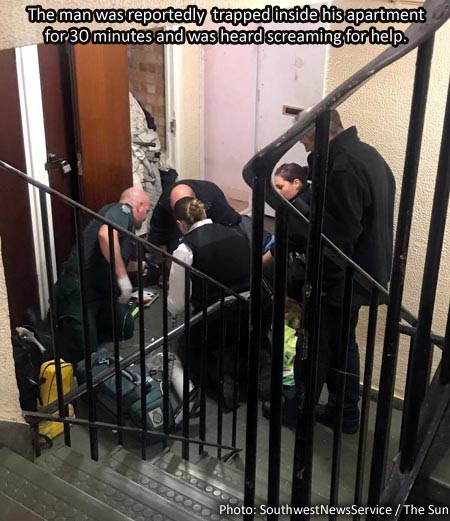 'He was a very good guy, he was respectful. When he wasn't on drugs, he was okay. He had the dog since I came here. His dog was okay, it never attacked, never. His dog was okay. It was a good dog. I don't know what his dog was called. It was white and black.

'I don't think he ever worked. He wasn't able to work because most of the time he was very aggressive. We saw him sleep on the floor outside his house so many times. He brought a lot of people back, different faces and not normal people.'

Asked if there had been a BBC crew shooting a documentary at the time, she said: 'No. I don't know anything about that. I never saw a film crew. I wasn't out. I just came here, I asked my neighbour, and she said Mario was attacked.

'I asked the police the next day, is the guy okay. They said no, nothing else. But my neighbor, she said to me he died.'

Another neighbor, Geoff Morgan, 52, said: 'He was in the flat but they took him out here. He didn't die when he came out. He was white, he was Cypriot.

'The police and the paramedics, they brought him out here. He was semi-conscious. He was talking, he was like screaming, screaming screaming.

'The door was locked from inside.'

Asked who called the police, he said: 'It must have been the neighbors. This is a constant thing with him, and a lot of people in the flat. Put it this way, he uses. To me, I didn't have a problem with him. I just knew he had an addiction, I think it was heroin.'

A spokesman for Scotland Yard said: 'Police were called at around 22:25hrs on Monday, 20 March, to a report of a man injured by a dog at an address in Norman Close, N22.

'Officers attended the scene along with the London Ambulance Service. 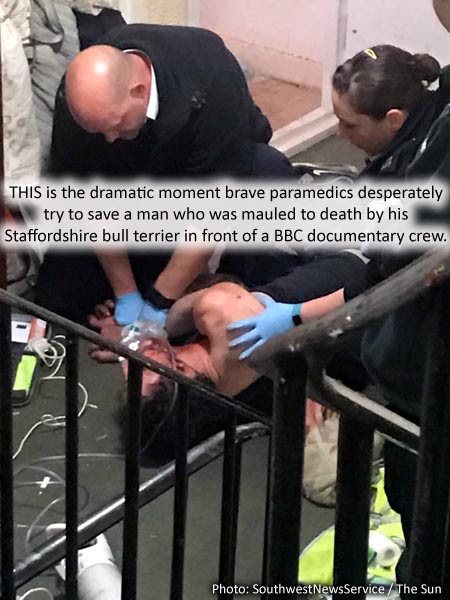 'The 41-year-old man - the owner of the dog - was taken to a north London hospital where he was pronounced dead at around 00:30hrs on Tuesday, 21 March. Next of kin have been informed.

'The dog was contained by officers and seized. It remains in secure kennels.

'The dog is a Staffordshire pit bull terrier, a breed not prohibited under the Dangerous Dogs Act.

'The man's death is not being treated as suspicious - a post-mortem examination at Haringey mortuary on Friday, 24 March gave cause of death as hypovolemic shock and damage to the airway consistent with a dog bite.

'Enquiries by police at Haringey continue to assist the coroner.'