New Hampshire: After Pit Bull mauled English Bulldog last month, judge ordered them to return the Pit Bull to its owner. Less than a month later, both of his Pit Bulls got loose and went on attack frenzy at shopping plaza

NEW HAMPSHIRE -- Two pit bull terriers that attacked shoppers outside a Market Basket and state liquor store have been located and put down by their owner.

About 7 p.m. Tuesday, the dogs escaped from their owner’s home, which is located near the South Gate Plaza where the attacks occurred a short time later. 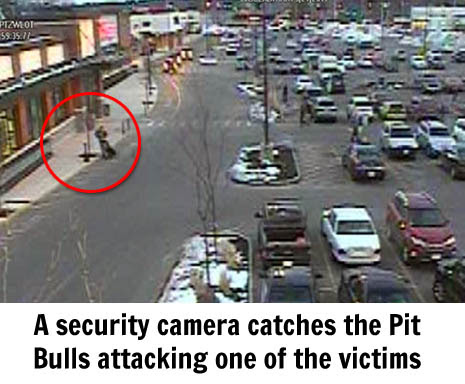 The dogs went after a man in front of Market Basket, another man outside the liquor store and a woman in the plaza, according to Sgt. Kevin Gelineau of the Seabrook Police Department.

The men were transported to Exeter Hospital and Anna Jaques Hospital in Newburyport, Mass., for treatment of injuries. The woman was wearing loose clothing and was unharmed - just terrorized, Gelineau said.

Police have had trouble with the pit bulls before, the sergeant said. The owner was recently cited when one of the Pit Bulls attacked an English Bulldog.

Police attempted to get the Pit Bull euthanized, but a judge ordered them to return the vicious Pit Bull back to its owner. Less than a month later, here we are - with victims and the dogs running loose,  in an attack frenzy at a shopping plaza trying to attack everyone. Good job, judge, you moron.

Gelineau said police intend to take action against the owner even though the animals are now dead. 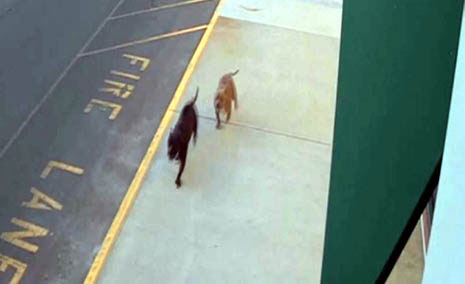 “It doesn’t change anything because he euthanized the dogs,” he said, confirming the dogs had been taken to a licensed veterinarian to be killed.

Police said they are not releasing the name of the dog owner at this time.

The New Hampshire Union Leader made a Right-to-Know request with the Seabrook Police Department Friday for the release of the name of the dogs’ owner.

Gelineau emphasized the seriousness of the attack.

“We’re glad there were no small children involved,” he said. “Hundreds, if not thousands of people, shop (at the plaza) every day.” 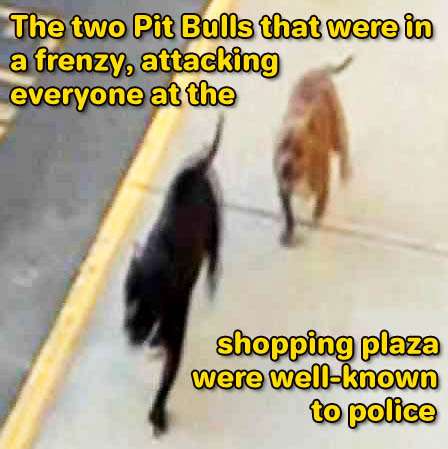 Gelineau said it is important for all dog owners to keep an eye on their pets and dogs on a leash when outside. Even if a dog is not dangerous, it could wander into traffic and cause a crash, or scare a small child, he said.

Between 4.5 and 4.7 million Americans are bitten by dogs each year and 20 to 30 of those attacks result in death, according to the Centers for Disease Control and Prevention.