NEW YORK -- A man was arrested after he threw his girlfriend’s dog from a balcony in Queens during a dispute, according to the NYPD.

“An animal. No home training,” was one woman’s reactions after PIX11 informed her what happened in a building along 40th Road last Friday night.

The NYPD says Yuk Cheung, 35, took his girlfriend’s dog, identified as a 12-year-old pug named Yoda, while they were arguing and hurled it onto the street, 70 feet below. The fall killed the dog.

When Yuk Cheung moved out of his ex-girlfriend Jennifer Chan’s apartment on 40th Road in Flushing, he left his 12-year-old pug behind. 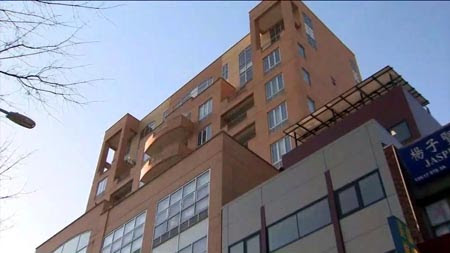 Cheung, 35, returned to Chan’s place March 17 and they argued about caring for the dog, named Yoda, and for him to find a place to stay that permitted animals, prosecutors said.

“(You) would not have to worry about the dog anymore,” Cheung allegedly responded before grabbing the small pup and leaving the apartment.

Cheung was questioned by detectives about dog’s death and he allegedly said he tripped going onto the balcony and the dog left his hands.

Cheung allegedly changed his story to say the dog leaped out of his arms and must have gone through the balcony’s metal railing.

Prosecutors said Cheung went on to say that he found the animal dead on the street and placed her in a box with ice and dumped the remains in a nearby garbage receptacle.

After further investigation, detectives concluded that Cheung had to have propelled the dog about 40 feet into the air for her body to have cleared the balcony, landing on the sidewalk before hitting the street, prosecutors said.

“Such acts of aggression toward defenseless animals cannot — and will not — be tolerated in Queens County,” said Brown.

Calvert Nurse, a neighbor, says the barbaric act was not easy because the seventh floor does not directly oversee 40th Road.

“He actually had to throw it across the roof which is sad because that is cruelty to animals,” Nurse said.

That is exactly what Cheung was arrested for at approximately 5:30 p.m. Tuesday at the 109th Precinct.

“I can’t even fathom doing that. I can’t imagine someone doing that,” said Steven Ing, who was in the neighborhood Tuesday evening with his dog, Remy.

Ing used to work in the garage connected to the building, and according to him, the neighborhood is tranquil.

Melissa Cheng lives in the building where the crime was committed.

The NYPD says the suspect has three prior arrests including one for assault.