Oklahoma: After Bryan Flowers' cat went into a neighbor's yard and was killed by their dog, Flowers went into the yard, shot and killed the dog and stole its body, say police

OKLAHOMA -- An Oklahoma City man was taken into custody after he allegedly shot his neighbor’s dog.

On March 21, officers were called to a home in the 2600 block of S.W. 66th following a reported shooting of an animal.

A witness told police that she heard a gunshot, a dog yelping and another gunshot before calling 911.

According to the arrest affidavit, as officers were speaking with witnesses, a child told police that his cat had gotten into the neighbor’s backyard and was killed by their dog. 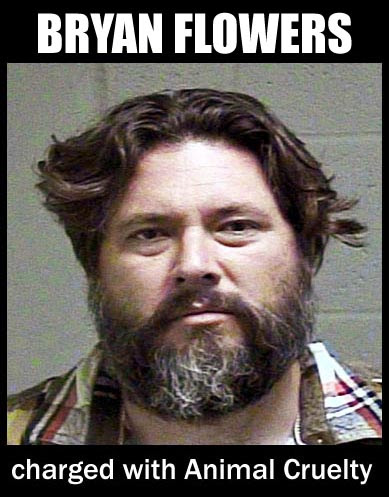 The boy told authorities that he told his father, 44-year-old Bryan Flowers, about his cat.

The report states that Flowers went into the neighbor’s yard to get the cat. He says that the dog lunged at him, so he shot it.

The affidavit claims that Flowers loaded the dog into his van and left the house because officers could not find the dog anywhere.

Flowers was arrested on a complaint of animal cruelty.

He should also be charged with theft because even though he killed their neighbor's dog, it was still their property, and he stole it when he put it in his van and drove away to dump its body.