ARIZONA -- A child was injured by an emotional support dog on a Southwest Airlines flight from Phoenix to Portland, Oregon Wednesday night, fueling the debate over regulations regarding animals on airplanes.

The dog’s teeth scraped the child’s forehead after the passenger approached the animal during the boarding process, according to a spokesperson for Southwest.

The child received minor injuries and was examined by an EMT before continuing on the flight, which departed 20 minutes behind schedule. The dog and its owner did not stay on the plane and instead remained in Phoenix, the spokesperson said. 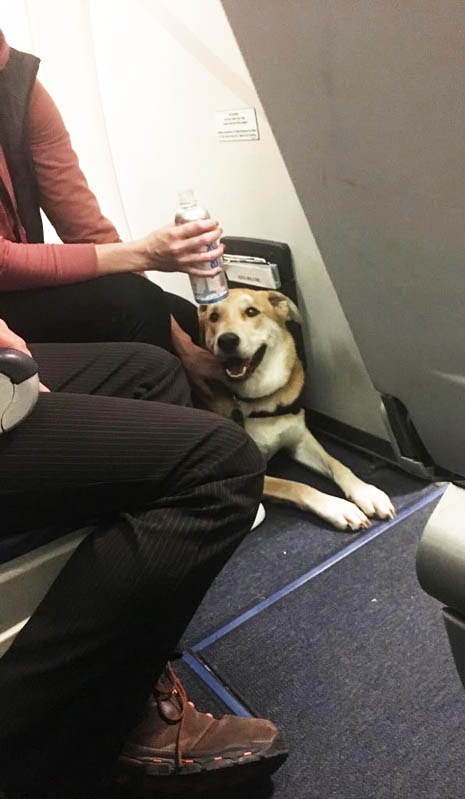 Another passenger on the same flight, Todd R., took a photo of the support animal and shared it on Twitter in a post that’s since been deleted, arguing that dogs should not be on planes and he would no longer be flying Southwest.

In another tweet, the passenger wrote: “When dogs are biting 6 year old kids on planes, it may be time to reconsider rewriting your 'safety' policy and procedure manual,'' AZ Central reported.

Reactions to the incident were mixed on social media. While some agreed with Todd, arguing that Southwest should create stricter regulations for emotional support animals, as other airlines have done recently.

Others felt the dog was not at fault and that the child should never have been allowed to approach the animal.

This dog is NOT a service dog. It is an 'emotional therapy' pet. Anyone who wants to need only go online pay a fee, answer a questionnaire and have a 'doctor' mail them a letter saying they need this animal for whatever reason. It's no different than the prescription pill mill doctors who write prescriptions all day long to drug addicts. They do it for the money.

That being said, ESA (emotional support animal) animals do NOT perform any task. They merely exist so that the owner can drag them everywhere so there is NO reason that said animal shouldn't be muzzled when taken out in public. They're not picking up items for this disabled owner. They're just sitting there. Or in this case, biting children on airplanes.

Southwest notes on its website that service and emotional support animals are allowed on both domestic and international flights, but the animal must be trained to behave in a public setting and can be denied boarding if it fails to do so.

“Southwest Airlines welcomes fully trained service animals and emotional support animals accompanying a Customer with a disability on our flights. As our requirements for transporting each type of animal are different, our Employees are trained to ask some fact-finding questions to determine which classification applies to a Customer’s animal,” the website reads.

The airline does note, however, that it will not allow “unusual or exotic” animals to act as support pets, including but not limited to the following: rodents, ferrets, insects, spiders, reptiles, hedgehogs, rabbits or sugar gliders.

In regards to the incident of the dog injuring the child, Southwest said: “As always, the safety of our Customers is our highest priority.”

After an emotional support peacock was denied entry on a United Airlines flight, the company followed in Delta’s footsteps, issuing similar new regulations for those who wish to bring animals on board.

United cited an 84 percent increase in poor animal behavior by so-called 'emotional therapy animals' (ESA) such as urinating, defecating, biting and attacking people on flights as impetus for the change. 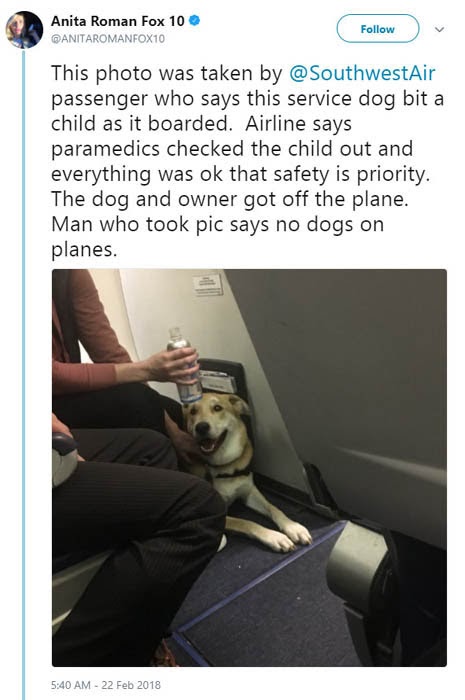 This photo was taken by @SouthwestAir passenger who says this service dog bit a child as it boarded.  Airline says paramedics checked the child out and everything was ok that safety is priority.  The dog and owner got off the plane.  Man who took pic says no dogs on planes.