FLORIDA -- On Valentine’s Day, a young woman’s small dog was killed by a Gainesville Regional Utilities employee who hit with a pry bar.

In a Facebook post, with more than 500 shares, Kiley Walker said it took two more days before she learned how her pug, Bentley, died. 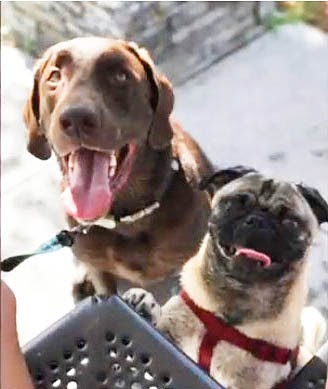 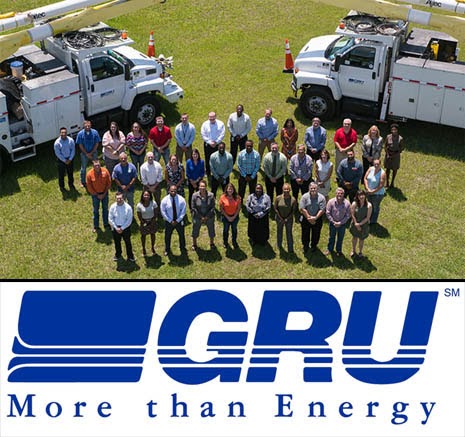 Gainesville Regional Utilities (GRU) officials claimed to The Sun that the event was unfortunate and that the dog, accompanied by a pit bull mix, became aggressive, leaving the employee with few options.

GRU is not releasing the employee’s name because of what they claim were  online threats.

“We’re not out to hurt or harm any dogs,” he said. “We’re out there just trying to do our job.” 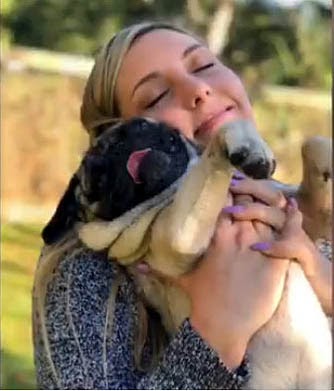 Mercer claims the Pug was biting a GRU employee’s leg, while the larger dog started to growl. The employee then [beat the small dog with an 18-inch metal pry bar] used to lift manholes, he said.

GRU officials say the employee followed protocol and training received from Bulli Ray, a company that specializes in training employees around the country on how to avoid dog attacks. 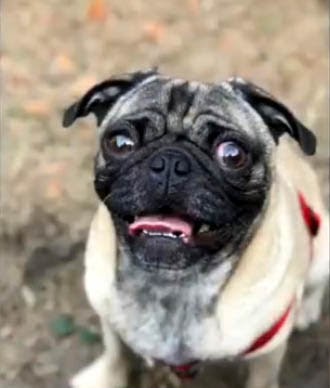 David Warm, a GRU spokesman, said the utility had at least three employees bitten in 2017, one that sent a man to UF Health Shands Hospital. GRU has logged about 30 dog bites over the last 10 years, he added.

Mercer said the GRU employee will not be disciplined.

“He was trying to defend himself from two loose dogs that weren’t at its residence,” he said. “They were running loose in the neighborhood.”

Walker, in her Facebook post, said she questioned the workers after finding her dog, but wasn’t given any answers. Gault said Walker left the scene, distraught, carrying her dog, assuming a car ran him over.

“There is no excuse for this kind of animal cruelty,” Walker wrote. “A grown man thought he needed to defend himself against a pug who isn’t even 25 pounds. Bentley should have not been hit so hard that he was killed. This is animal cruelty being swept under the rug.” 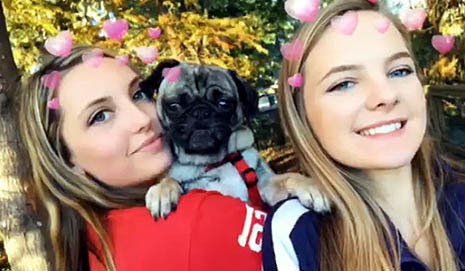 Walker has received a wide amount of support and condolences on her post, with some suggesting she sue the city-owned utility.

“It’s very unfortunate,” Gault said. “We are very sorry for what happened.”

This year on Valentine’s Day my baby boy Bentley was killed by a worker for the Gainesville Regional Utilities, FL (GRU).

Without my roommates and I knowing, our lawn guys left the back gate open after mowing the yard Wednesday morning. Bentley and Luna (a roommates dog) were let outside to play. They escaped through the open gate and began to roam the neighborhood without any of us knowing.

As soon as we realized they were missing, we immediately started running around the neighborhood looking for them. Luna was found but Bentley was not. 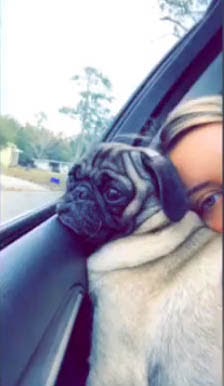 My roommate noticed a few GRU trucks and workers down the street and decided to go ask if they’d seen anything, and when she approached them they seemed flustered. They asked if she was looking for a pug and when she said yes they said he was laying up here. She ran up to find Bentley’s limp body in the grass.

She asked them repeatedly if they knew what happened to him and each time they mentioned there were cars driving by and the dogs chasing a meter stick but never clearly addressed what had killed him. We assumed that whoever did it hit and run in a car.

On Friday, 2 supervisors of GRU came by my house to inform my roommates and I that Bentley had in fact not been hit by a car but that a worker that was on scene during the accident had really struck and hit him with a meter stick, and that was what killed him. 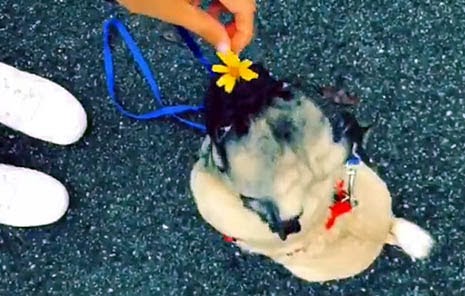 He claimed that Bentley (a pug) was charging them and this was an act of self defense. Anyone who knows Bentley knows that he was the sweetest boy. There is no excuse for this kind of animal cruelty.

A grown man thought he needed to defend himself against a pug who isn't even 25 pounds. Bentley should have not been hit so hard that he was killed. This is animal cruelty being swept under the rug.

The workers of this company let my roommates and I believe that someone had hit my sweet Bentley in a car, all the while they sat and watched us cry over his dead body knowing what they had done but said nothing.

And still they continue to do nothing about the situation. They will not release this awful mans name to me. Please help share bentleys story to protect future innocent animals and bring justice to my little man. #JusticeForBentleyBoy 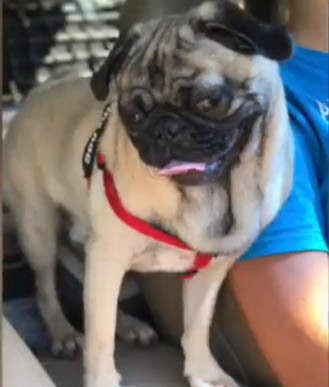 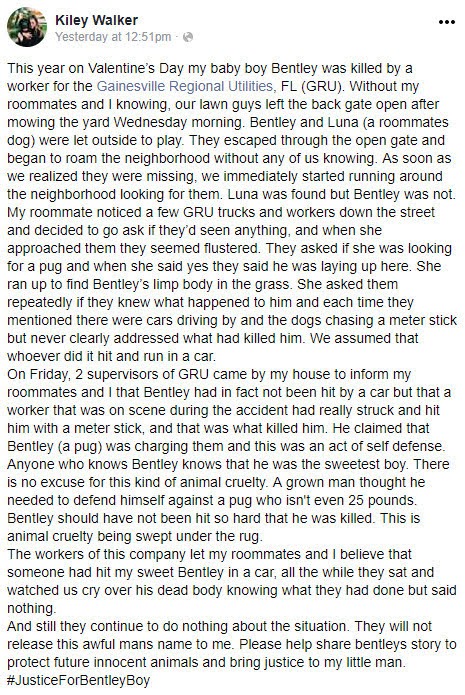 Note: Unfortunately, unless a witness comes forward or someone nearby had surveillance cameras, this guy is going to get away with it. She needs to sue them in order to force them to provide her with documentation showing that this guy actually went to a doctor and was bitten. He needs to be deposed by her attorney, his coworker needs deposed. His criminal history needs to be looked in to. Yes, you have a right to defend yourself if attacked by a dog, but give me a break... a Pug?! 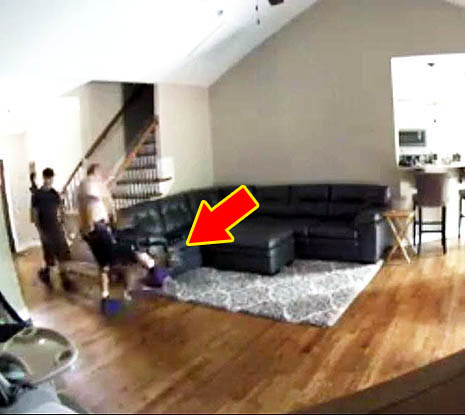 North Carolina: Plumber is fired from PF Plumbing for viciously kicking client's dog in the face, but what about the coworker who saw it and never told his employer what this guy had done??? 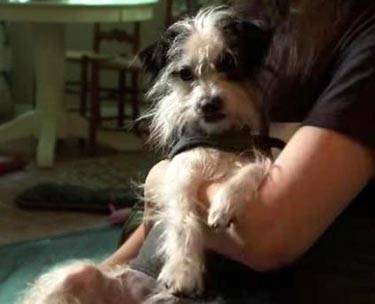 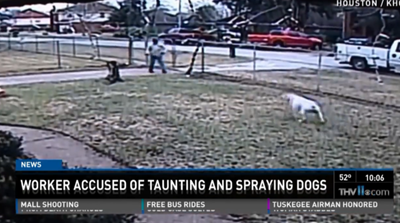 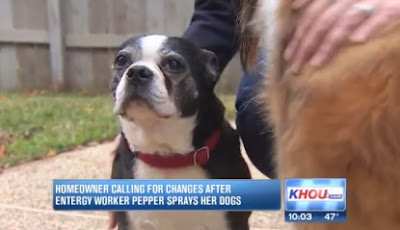 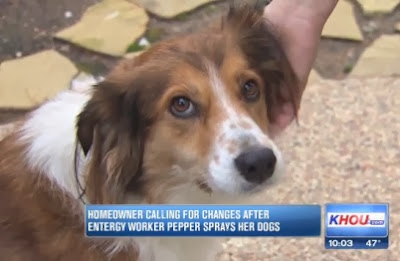