UNITED KINGDOM -- A Polish man returned to Wales to face justice after his illegal fighting dog attacked a 10-year-old girl on Deeside.

A warrant had been issued for the arrest of Emil Gorecki, 23, following the incident in September 2016 which left the girl with serious injuries to her arm.

Appearing at Wrexham Magistrates Court, Gorecki admitted owning the American pit bull dog which sank its teeth into the girl after she had stopped by the Polish man’s back yard to stroke a kitten he owns.

Gorecki, who walked up to the court building wearing a sweatshirt sporting the words “Pit Bull” in silver letters, spoke to confirm his name, date of birth and address and followed proceedings with the aid of an interpreter.

This was done to mock that little girl who was mauled by his Pit Bull. 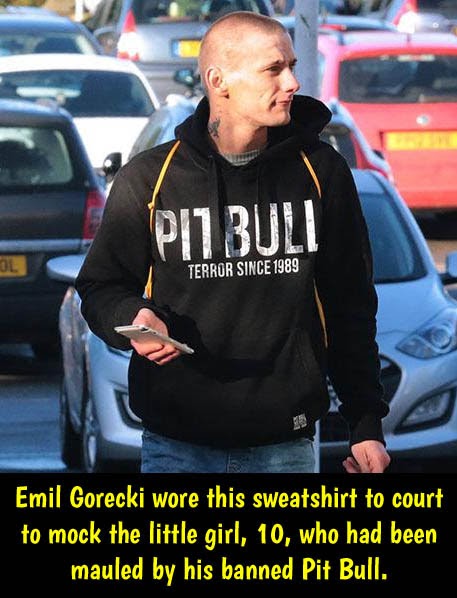 Justin Espie, prosecuting, said at about 7.30pm on September 9 the girl had left home to visit a friend but, after finding she was not in, she returned home down an alleyway.

She saw a kitten at the rear of the defendant’s address on Chevrons Road, Shotton, and as she stopped to stroke it she noticed a very aggressive-looking dog looking at her from the patio window.

The dog had then run out from the house and sniffed the 10-year-old before jumping up and latching on to her arm with no warning.

In her statement the girl described it as a “hard bite” and “very painful” but Gorecki, then 22, had managed to hit the dog causing it to loosen its grip.

Gorecki’s sister then took the girl inside the house where she removed her coat and Gorecki tended to her wounds with a towel.

The little girl described feeling “frightened and upset” and although she could not understand what Gorecki and his sister were saying she realised they wanted to take her home.

On taking her home, the Polish pair tried to explain what happened before her mother called an ambulance.

At the hospital she was found to have a deep laceration to her arm requiring stitches and she was put on a course of antibiotics and painkillers.

The dog was seized and taken to an undisclosed location where it was examined by a police dog handler and confirmed as a prohibited American pit bull.

A victim statement by the girl’s mother was read to court which said the girl could no longer put weight on her arm and was scared to do handstands.

The mother added her daughter struggled to lift herself out of the swimming pool and how the incident had completely changed her outlook.

The scarring was permanent and she had become self conscious and covered her arm at all times.

David Matthews, defending, claimed Gorecki, who was accompanied by an interpreter, was “extremely sorry” and added he was “shocked” as the dog had never behaved aggressively before.

Gorecki claimed he had bought the dog two years previously in Stoke-on-Trent and believed it to be a Stafforshire bull terrier after having it inspected by a vet and the RSPCA.

Where's the proof that he had it "inspected by a vet and the RSPCA" and that they agreed that it was a Staffordshire pit bull?

SURPRISED OWNER
He claimed the dog had always been safe with children previously.

“[The Pit Bull] behaved in a way that was completely out of character,” said Mr Matthews who added that although Gorecki was fond of the dog, he had no objection to it being destroyed.

A probation report from Andrew Connah said the Polish man had returned to Wales to resolve the matter and although he was intending to return to his homeland where he had a four-month-old daughter, he would take full responsibility and would stay at his sister’s house for the duration of any punishment.

District judge Gwyn Jones said: “I’ve listened very carefully and taken into accout the impact this has had on the young girl. It has had a physical impact through the marks on her arms which young girls take very seriously and it has also impaired her confidence about doing things 10-year-old girls should do.

“You acted properly, you controlled the dog, provided care for the girl and ensured she was taken home – but the lack of safety measures could have been foreseen by you.”

Mr Jones sentenced Gorecki to 26 weeks in prison for the first offence of being a person in charge of a dog dangerously out of control causing injury and 18 weeks for the offence of possessing a fighting dog.

Both sentences are to run concurrently and were suspended for a year.

Gorecki will also carry out 180 hours of unpaid work and not be allowed to own a dog for six years.

Mr Jones also ordered that the dog is destroyed.